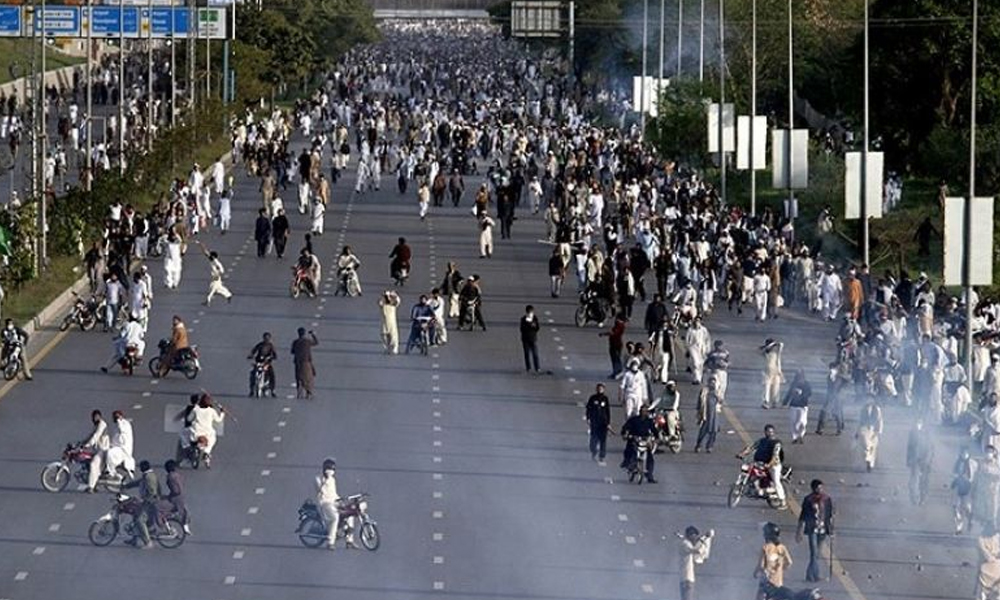 The situation in the capital city has grown worse and the Pakistan Army has been called in to control the rising tension in Islamabad. The city police and Rangers failed to control the charged crowd protesting against the hanging of Mumtaz Qadri.

According to Inter-Services Public Relations (ISPR), the army has been called in to guard the Red Zone as the charged mob had earlier breached the Red Zone security and entered the highly guarded zone.

Earlier, the charged mob had breached the highly guarded Red Zone. The angry mob also set ablaze the Metrobus station in Islamabad and also torched at least three motorcycles parked inside the station along with containers blocking roads.

The militant elements are busy harming the public property while the series of breaking and entering in various shops is also ongoing.

Thousands of supporters of an executed Islamist assassin were holding a sit-in in Islamabad Monday after submitting a list of demands including the execution of a female Christian blasphemy convict.

Mumtaz Qadri was hanged on February 29 for killing a Punjab governor over his call for blasphemy reform, in what analysts said was a “key moment” in Pakistan’s long battle against religious extremism.

But it also exposed deep religious divisions in the conservative Muslim country of 200 million.

An estimated 25,000 supporters of Qadri, a former police bodyguard, forced their way into the capital from its twin-city Rawalpindi, where they had gathered Sunday afternoon to offer prayers.

By evening, they were engaged in violent clashes with police and paramilitary troops, who used heavy tear-gas shelling in an unsuccessful attempt to prevent them from pushing closer to the city centre.

On Monday, around 3,000 protesters, many carrying sticks, remained at the city’s main Constitution Avenue close to key government buildings, including the presidency and parliament, which were guarded by soldiers.

Protest leaders were making speeches on a makeshift stage, as supporters drank tea from plastic bags and washed themselves using water bottles.

Their demands include the execution of Asia Bibi, a Christian mother-of-five who has been on death row since she was convicted in 2010 of committing blasphemy during an argument with a Muslim woman over a bowl of water.

They are also calling for Qadri to be officially declared a “martyr” and want the immediate imposition of Sharia law.

The federal government has declined to respond to any of the demands, and the stand-off is ongoing.

Sit-ins, or “dharnas”, are a popular form of political protest in Pakistan.

The protest came as a Taliban suicide bomber blew himself up in a park crowded with families celebrating Easter in the city of Lahore, killing at least 72 people, nearly half of whom were children.