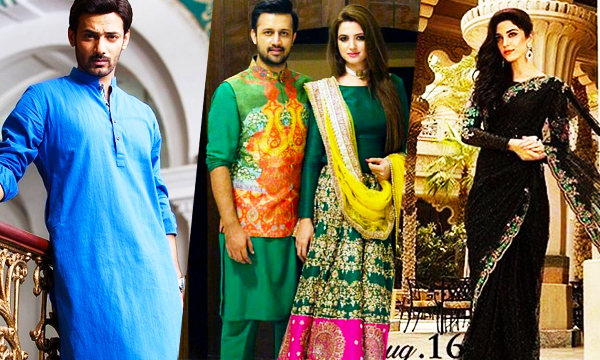 Did last week pass by too quickly for you? Were you occupied with something and just didn’t have log on to social media for daily updates? Well fear not. Here is your weekly update of all the things that happened and went viral. So grab a cup of coffee, or tea and read on.

After taking Pakistan by storm with her powerful vocals, Momina Mustehsan has gathered a lot of fan following. She just celebrated her birthday on Sunday, by flying off the Colombo. What a start to a new year of her life.

Absolutely loved last night! Thanks a lot for the early surprises!! ☺️ Now off to Colombo for my birthday ✈️

Atif Aslam revealed the secret behind his toned self. What’s the point of working out if you can’t show it off?

He then traded the shorts for a classy green kurta that he matched with his wife’s gorgeous outfit.

A post shared by PAKISTANI CELEBRITIES🇵🇰 (@pakistani.celebrities) on Sep 3, 2016 at 9:12am PDT

Maya Ali donned a stunning black sari by Maria B. The new collection by the designer is now available online.

Ready to Wear Eid Collection 2! COMING SOON at all SANASAFINAZ stores nationwide and online at www.sanasafinaz.com

This would have not been possible without your Love and Team Agha Noor's endless nights of Hardwork, Thank you so much for your support today in making the opening a Huge Success. #AghaNoor

Across the border, we saw a Celebrity power walk happening in action.

Zahid Ahmed, shocked the country with his tremendous transformation. More power to him.

This picture has been circulating on many websites and people have been asking me if this is true. Well here's the answer…it is absolutely TRUE! The picture on the left is me (Zahid). But just like every picture, you never get to know the whole story…apart from getting a solution for my hair loss and being over weight, there's much more to my story! Here it is! 2011 – Working as COO (Chief operating officer) for an I.T company 2011 – Got married 2011 – went for fabulous honeymooning in Malaysia 2011 – on last day of honeymoon found out that the company didn't exist anymore (they were fraudulent) 2011 – came back to Pakistan with new terrified wife, no job and huge debt on credit card 2011 – job hunt started, marriage was about to fall apart 2012 – Had a terrible accident and injured spine 2012 – 4 months of not being able to move, divorce seemed a reality 2012 – got a radio show because of the voice 2012 – further destroyed the spine by trying to go to the radio 2012 – now a vegetable, lost all movement, lost radio, had some self esteem left 2012 – head of PIMS Islamabad recommended spinal surgery 2012 – got surgery, started walking again 2012 – got a job which paid 10 times less, worked hard – marriage still on the rocks 2012 – started doing a show for PTV home discussing English movies. Some pride restored. 2012 – Head of PTV notices my English, hires full time to launch PTV WORLD the English channel. 2013 – worked against the culture of PTV to launch the channel. 2013 – PPP Government topples, chief of PTV fired. Now I was left without a boss. 2013 – Team working with Anwar Maqsood approaches me for playing Jinnah in SAWA 14 August. Wife supported 2013 – Played theater for a year. Got hair solution for Jinnah. Lost 22kgs 2014 – left theater because producer was a corrupt soul who owed everyone money 2014 – no home, no money, with wife..left for dead on roads of Karachi 2014 – A lady from a production house of HumTV calls for audition after seeing me on stage 2014 – Gets selected for MEHRAM 2016 – Became what you see now. If this story doesn't motivate you, I don't know what will. I am Zahid Ahmed , I am passion and I am the future.