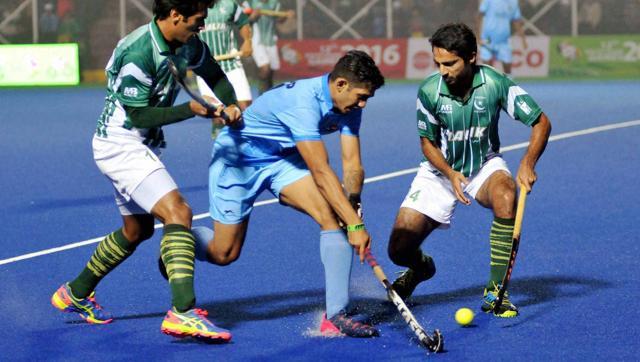 UPDATE:  India beat Pakistan at the 25th Sultan Azlan Shah Cup 2016 at Azlan Shah Stadium, Ipoh, Malaysia in a pool match by 5-1. The Indian team improved their game and reached a convincing 5-1 victory over the rivals Pakistan.

India gained a 2nd spot in the league standings after today’s victory. This is the 3rd victory of the tournament by India after they defeated Canada and Japan.

Pakistan Hockey team is all set to face the Indian hockey team in a pool match as part of the 25th Sultan Azlan Shah Cup Tournament. The tournament is being held in Ipoh, Malaysia this year and hockey fans from all over the world are expected to gather at the venue to witness the clash of the titans one more time!

According to the details, the Azlan Shah Cup Tournament final match will be played on April 16th. The details also included that seven teams are to participate in the tournament and each team will get a chance to play six pool matches. There is also a place for the fifth and sixth position in the tournament.

India has already qualified for the RIO Olympics 2016 and playing in the Sultan Azlan Shah Cup is the perfect preparation for the grand event. India has defeated Canada and Japan in the competition; however, their performances have not been up to the mark yet. Sardar Singh and his team need to display better hockey performance in order to defeat Pakistan.

Pakistan has played matches against Australia, Canada, and New Zealand in the tournament so far, winning only one against Canada 3 -1 on April 6th.

Pakistan won the Azlan Shah Cup earlier in 1998, 2000 and 2003; Pakistan also stood as the runner-up six times in the history for the same cup.

Check out the schedule and other details of the match here:

There will be no live coverage in the UK. The match can also be viewed via live stream on starsports.com.