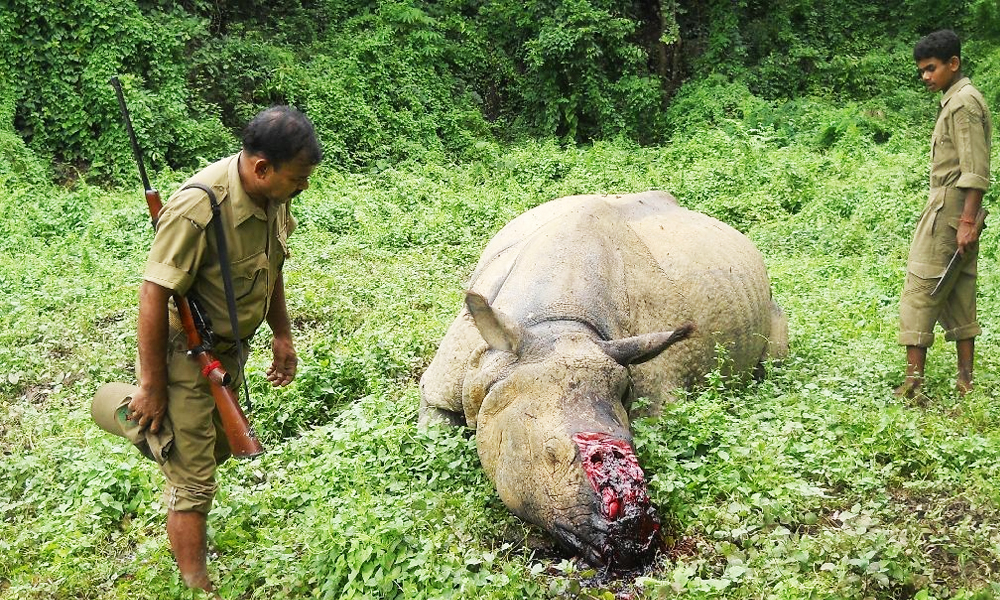 Poachers shot dead a rhinoceros at a wildlife park in northeast India hours after Britain’s Prince William and his wife Kate visited the sanctuary, a wildlife official said Friday.

Rangers found the dead rhino with its horn missing on Thursday — the day the royal couple left the Kaziranga National Park in Assam state, home to two-thirds of the planet’s remaining one-horned rhinos.

“Poachers used AK-47 assault rifles to kill the adult male rhino and after killing the pachyderm they took away its horn,” Subasish Das, a senior forest officer, told AFP. It was the second rhino killing in the past four days. Poachers killed an adult rhino on Monday before gouging out its horn, leaving it in a pool of blood.

Kaziranga has fought a sustained battle against poachers who kill the rhinos for their horns, which fetch huge prices in some Asian countries where they are used for medicines and jewellery.

The park’s website said 27 rhinos were poached in 2014 and another 17 last year. A recent census estimated there were 2,400 one-horned rhinos, currently listed as “vulnerable” by conservation groups, in Kaziranga out of a global population of 3,300.

During their visit to a Kaziranga the Duke and Duchess of Cambridge met wildlife officials  battling to protect vulnerable rhinos from poachers and fed a rhino calf with a giant milk bottle.

William, the second-in-line to the British throne, has repeatedly condemned illegal wildlife trafficking and has encouraged anti-poaching efforts. He is a patron of the elephant conservation charity Tusk Trust.

A spokesman for the royal couple said they had been upset by the poaching.

“The Duke and Duchess were angry to hear about the killing of this rhino during their visit,” British broadcaster ITV quoted the spokesman as saying.

“They hope their time in Kaziranga encourages others to support the brave rangers that are protecting animals that are so important to the communities that surround the national park.”