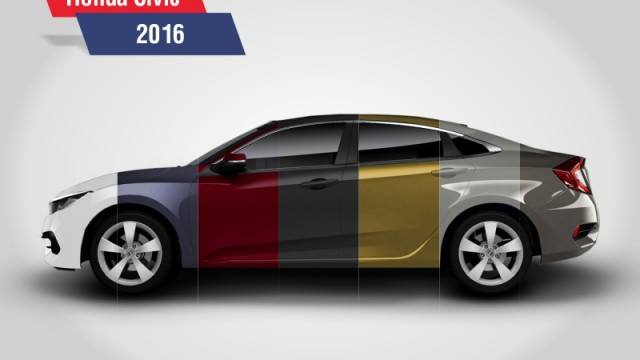 The new Honda Civic will launch internationally in early 2016 however this 10th generation of Honda’s Civic is expected to launch in Pakistan in 2017.

Honda Civic fans can now rejoice, with the new 10th generation model  just around the corner. The new Honda Civic 2016 has caught many eyes since leaked spy shots and patent images hit the internet in April.

With more sporty design: the new Honda Civic Concept, exhibited in New York auto show earlier on 1st April, is back with its inceptive persona, and it will certainly touch you off.

The new model will make its debut in the US this fall, following its worldwide launch in early 2016. Initially, the Sedan version of Honda Civic will hit the market succeeded by Coupe, Si, Type-R and a 5 door model. But the Honda Atlas Cars Pakistan Limited is expected to introduce the highly anticipated 10th generation Honda Civic in Pakistan in 2017.

“The new honda civic 2016 model will undoubtedly be more dynamic, the most technologically advanced and most sophisticated and stylish we’ve ever built. Honda could be more proud to have been designated World Senior Producer for vehicle, which will be assembled right here in our famous factory in Alliston Ontario.”

Since its first launch in the Pakistani market, Honda Civic has been struggling against its arch-rival Toyota Corolla which had undeniably aced the competition.

However when it comes to design, luxury and drive experience Honda Civic has always triumphed over Toyota Corolla which somehow is more enduring on local rough roads providing better fuel economy as well as cheap repair and maintenance.

Assuming a lower stance for ultra-sporty design with lower wheelbase and wider posture, the new Honda Civic strikes with a more aggressive look. It has a prolonged hood with comparatively shorter front, with the glass located at the far-end.

The interior has also undergone some prominent changes Intelligent Multi-Information Display and multi-tier gauge cluster have been embedded under one cover, the infotainment unit has been redesigned, the gear lever has been modified and some other alterations has been made for bin space, econ button etc.

The new Civic will also replace existing non-turbo 1.8L engine with 1.5L turbocharged engines from Earth Dreams Technology Company. The power of the engine is yet undisclosed, but it is expected to yield 150-170 hp, close to current 1.8L non-turbo engines output, with much more efficient fuel economy.

To boot, Honda Atlas has launched a marketing campaign with an ambition to sweep the board against 11th generation Toyota Corolla; “So Much More for Nothing More”, as part of which it will offer the upcoming Civic at the price of the current model.
Honda Civic’s first look is incomplete without mentioning the colors. Famous automobile website Pakwheels.com made sure of introducing Honda Civic 2016 with its bold and pronounced colors. With sleeker, more intuitive design and powerful and good-at-fuel economy engine, Honda Civic 2016 will be a sensational spin-off in the automobile industry. Something we all are eager to see on roads.