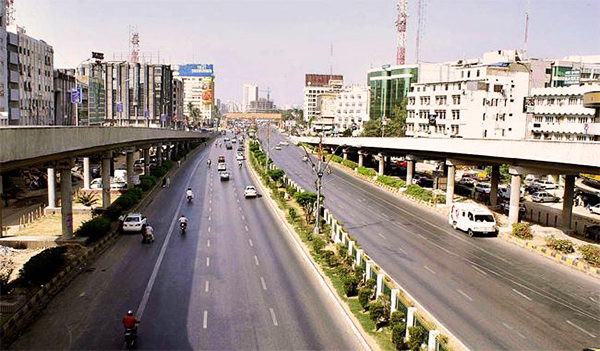 Loaded and heavy vehicles will not be allowed to travel on Karachi’s Shahrah-e-Faisal during 7am to 11pm, announced the traffic police on Monday, Geo News reports.

A traffic police spokesperson said that the decision was undertaken to ensure a smooth flow of traffic on Shahrah-e-Faisal.

Previously it was announced that rickshaws will also be banned on the road- the ban was then suspended for a month.  According to DIG Traffic Ameer Sheikh, a survey will be conducted during this time period, to decide whether rickshaws should be allowed to travel on the road. “Bus-stop boards and other signboards will also hang at different places of this track in a few days,” he said.

DIG Traffic Ameer Sheikh had stated that a new rule will be implemented from September 26th , banning three passengers from riding motorbikes on the Shahrah-e-Faisal road.

A new traffic plan was implemented earlier this month, for Shahrah-e-Faisal with a total of 132 traffic policemen who are deployed on the road to manage traffic. The special traffic force is called the Shahrah-e-Faisal Force.

The police force will be having 8 lifters and 44 motorbikes, DIG Traffic said. The policemen will be operating in two shifts while those who disrupt traffic will be charged with anti-terrorism laws.

Rickshaw Ban on Shahrah-e-Faisal Suspended for a Month