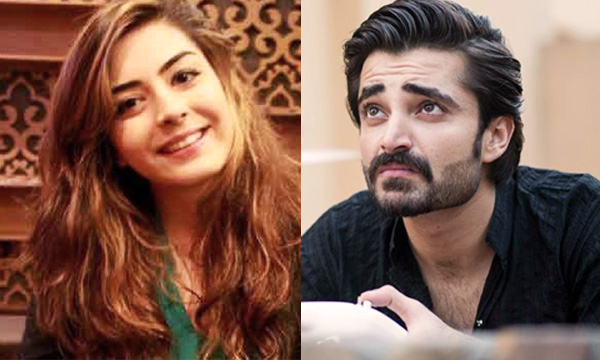 ‘Jawani Phir Nahi Ani’ actor, Hamza Ali Abbasi, known for being a little too vocal on social media and stating his opinion on every controversial topic he can get his hands on – the recent one being his stance on gay marriage legalization in the US.

However, we have something new to add to this social media drama. Yes! The Hamza-Imaan Twitter dispute. If you have not witnessed it yet, here is all you need to know about it.

The actor doesn’t seem to be active on Twitter, but the issue at hand definitely needed his attention, according to him.

I can tolerate Pakistanis celebrating gay marriage being legal in US, but i will not celebrate it. Hate the sin, not the sinner.

But, what lit the flame was when Imaan Mazari, daughter of PTI’s spokesperson, Shireen Mazari, declared a war against Hamza and asked for support with the Hashtag #BanHamzaAliAbbasi

Someone else finally having the right to marry someone they love doesn’t make a difference in your life. Keep your hate to yourself.

No religion teaches u to discriminate/spread venom ag a particular grp of people based on your personal life preferences. #BanHamzaAliAbbasi

I just reported Hamza Ali Abbasi for hate speech. Please do the same. Incase you haven’t read the filth he wrote: https://t.co/GSMvjwjp8n

This led to two trends on Twitter, one was to report Imaan and other to Ban Hamza.

So clearly I was right about PTI being a bigoted party. PTI supporters have started trending “Report Imaan Hazir.” If you think you can 1/2

Okay so now idiots want to report @ImaanZHazir because she’s speaking up for marginalised groups. Selective morality on rights by bigots.

#BanHamzaAliAbbasi not because he doesn’t have the right to free speech but offending a group of people is not free speech it’s rude.

Well done, lads, you’ve served your nation well by bad mouthing a girl on Twitter. How dare she question (your concepts) of morality, no?

R all the desi liberals gay? We understand you love Billo, but same sex marriage is forbidden in Islam! Hamza is right! #BanHamzaAliAbbasi

And then, there are some who are just there for fun.

And then some with twisted hopes:

And despite all the drama, there are some who have no clue at all.

The responses to Hamza Ali Abbasi’s tweet was on the extreme sides, some supporting him and some of the people disagreeing with him.

Hamza Ali Abbasi very worried about a SC judgement in a country that is thousands of miles away. As a consequence, I…

Hamza Ali Abbasi could just inform his nephew that gay marriage is legal in the US now, & it’s voluntary. His nephew could be less ignorant.

Hamza Ali Abbasi reminds me of a friend who knows nothing about anything but has to comment on everything just to look cool.. #Moron

.@iamhamzaabbasi Your homophobia is outdated. Learn actual science & history. LGBT people have existed in all cultures at all times.

Hamza Ali Abbasi reminds me of a friend who knows nothing about anything but has to comment on everything just to look cool.. #Moron

@iamhamzaabbasi It’s one of Sign of Qiyamah & this was the why Allah sent Azab on Qaum e Looth.

@iamhamzaabbasi Hate the belief not the believer. And your beliefs are roundly stupid.

@iamhamzaabbasi Barbaric neanderthals like you are just one of the few things which require desperate eviction from this country. Bellend!

@iamhamzaabbasi What are you doing about your brothers dropping homosexuals from rooftops?

@iamhamzaabbasi Moral crusader. This nincompoop knows how to use Islam as tool to fuel people’s emotions. Social activists! take notes.

@iamhamzaabbasi Wish we had more saner voices like u in show biz. Keep going Hamza, u might add good values to the industry.

Hamza Ali Abbasi’s only problem is that he needs a certificate from Allah that his showbiz career is halal & will lead him to Jannat.