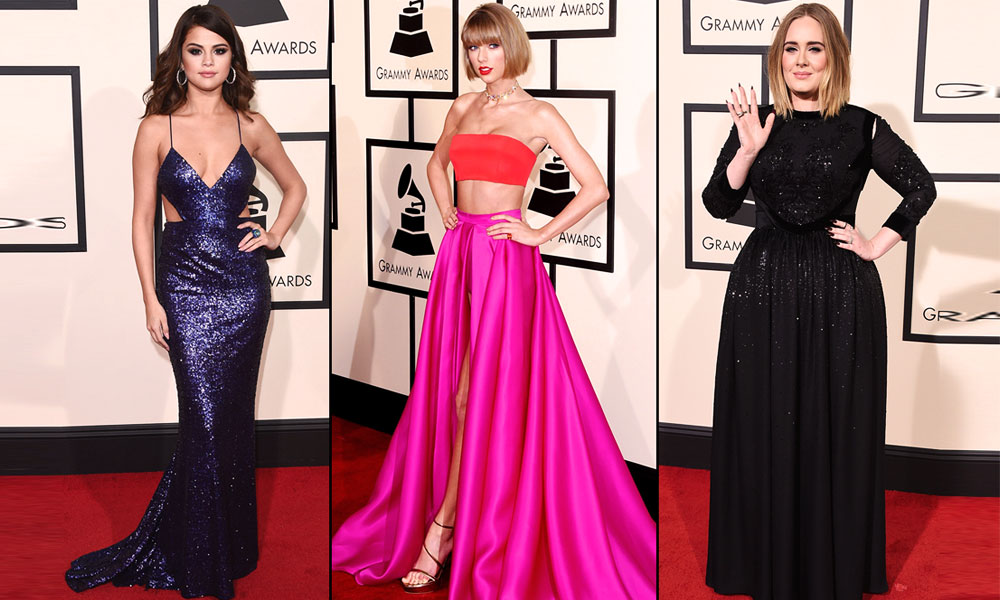 Here are a few key takeaways from the A-list fashion parade:

Taylor Swift and Selena Gomez have had their share of high-profile romances gone bad. So for the 58th Grammys ceremony at the Staples Center, they made it a girls’ night out — and arrived together on the red carpet. T-Swizzle, already a double winner on seven nominations, earned quick rave reviews on Twitter for her fierce two-piece Versace ensemble — a red bandeau top and a bright pink full ball skirt, slit all the way up the front to her waist.

Gomez, her long brown hair curly and loose down her back, looked sultry in a sleek sparkly sapphire blue Calvin Klein gown with a plunging neckline, side cut-outs and spaghetti straps.

The pair posed together for pictures — more proof that Swift’s “girl squad” is as strong as ever.

Lady Gaga meanwhile is a squad all her own. She stunned in a long royal blue coat from Marc Jacobs embellished with silvery swirls — a Ziggy Stardust get-up that was clearly part of the build-up to her tribute to late rock legend David Bowie. She even went for the fiery red hair and heavy blue eye shadow.

British singer Ellie Goulding, a nominee in the best pop solo performance category for her “Love Me Like You Do,” looked sweet in a simple pink Stella McCartney slip gown with a train. But who says girls should have all the fun? The 31-year-old Hunt, who is nominated for the coveted best new artist award as well as best country album, performed with another country star, Carrie Underwood.

British superstar Adele wore perhaps the most demure gown of the night — a romantic long-sleeved black Givenchy gown with crystal accents and the slimmest of cutouts at the shoulders. It earned mixed reviews from the Twitter fashionistas. Carrie Underwood was a vision of old-school glamour in a strapless black Nicolas Jebran gown tied in a knot at the waist, creating a sexy thigh-high slit. Accessorize — with a crop? He even used it to smack Depp on the red carpet where the trio — dressed all in black, of course — talked about their evening tribute to late Motorhead frontman Lemmy, real name Ian Kilmister, who died of cancer in December.

The band is making their television debut during Monday’s broadcast.

Too much of a good thing?

The Grammys red carpet has often been a place to make a statement — and show off as much skin as possible. Jennifer Lopez’s plunging barely-there green Versace gown in 2000 is still a fierce benchmark.

R&B singer Ciara smoldered in a backless gown with one black panel and another encrusted with silver accents — all of it tied in a bow at the waist, showing off some serious leg. But sometimes, the skin sweepstakes can go wrong. Very wrong.

Singer Joy Villa arrived on the red carpet wearing what could hardly be described as a dress — strips of metallic material that looked like dinosaur bones and revealed most of her assets… and all that with a giant train and a headdress. Manika looked more like a burlesque dancer than a singer, in a see-through gown with silver beading to cover the most private parts.