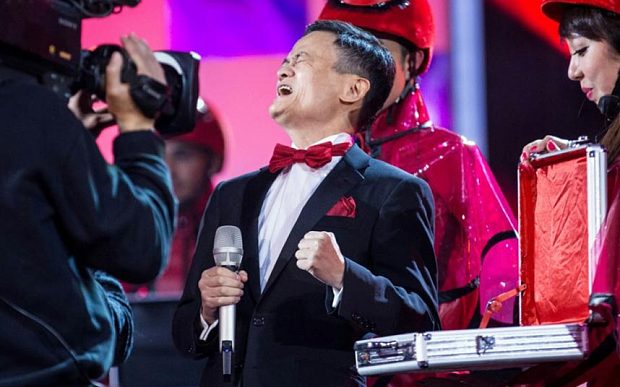 Singles Day is not a traditional Chinese festival, but e-commerce giant Alibaba has been pushing November 11 — a date heavy on ones — since 2009 as it looks to tap the country’s huge, and expanding, army of Internet shoppers. At first it was marketed as an “anti-Valentine’s Day”, featuring hefty discounts to lure singletons and price-sensitive buyers.

But with sales hitting new highs year after year, it has become a massive — and highly lucrative — business opportunity embraced by the nation’s digital retailers.

Competition for a slice of China’s online population of 668 million is turning increasingly fierce. James Bond actor Daniel Craig, and Hollywood star Kevin Spacey — in his role as President Frank Underwood from the Netflix series “House of Cards” — were just two of the galaxy of foreign and domestic stars involved. And the company’s efforts were paying off in spades, with shoppers splashing out more than $10 billion in the first 14 hours of the sale.

This year’s tally had already outstripped last year’s gangbusters effort, with the 2014 US dollar total of $9.3 billion matched a little more than 12 hours after the promotion’s midnight start.

In comparison, desktop sales for the five days from Thanksgiving through Cyber Monday in the United States last year stood at $6.56 billion, according to Internet analytics firm comScore. “The 2015 sale has eclipsed last year’s final results in a little over half the time,” the company said.

In an earlier release Alibaba’s chief executive officer Daniel Zhang said: “The whole world will witness the power of Chinese consumption this November 11.”

Another one of China’s main online retailers, JD.com, said it had completed more than 10 million transactions by 10 am. That was almost twice as many as last year’s total.

– Milking it -The task of putting customers’ purchases into their hands is huge. Alibaba said its logistical arm and its partners would use more than 1.7 million personnel, 400,000 vehicles, 5,000 warehouses and 200 airplanes to handle deliveries.

But the scale of the buying also has repercussions. Australian company Bellamy’s had to apologise to customers Down Under after supermarket shelves there were stripped bare. The event has received vocal support from the government at a time when China’s economic expansion is slowing and Beijing is trying to transform its growth model into a more sustainable one driven by consumption.

Highlighting the need for the transition, the mega-spending spree came as the government announced industrial output growth had fallen to a six-month low in October. The 5.6 percent rise is the latest indicator that China’s expansion is slowing after years of breakneck growth.

Chinese Premier Li Keqiang’s office phoned Alibaba chairman Jack Ma hours ahead of the promotion, “congratulating and encouraging the creation and achievement of the 11.11 event”, said a posting on a social media account of Tmall, the group’s business-to-consumer arm.

– ‘Eat dirt’ -Chinese Internet users revelled in their acquisitions Wednesday — although many lamented that they had spent far too much money.

“I can only afford to eat dirt for the next half year,” said a user on Sina Weibo, with an attached screengrab of a Taobao app showing she had bought 42 items.