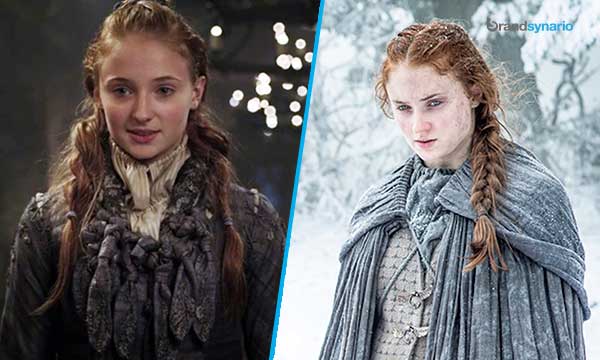 Everyone has had their heartbroken with their beloved character being killed off on the massively popular show Game of Thrones. But for those who have survived, the journey hasn’t been any easier. So we took a trip down the memory lane to scour out images of the surviving characters as they were on Season 1 and compared them with how they appear now, after being tested and put through every kind of hell as can be imagined in the GOT universe.

The eldest of the surviving Stark children, Sansa has seen her fair share of trouble. Right from the start she is seen being tormented by someone or the other. And the theme continues. We last saw her trying to escape from her current tormentor Ramsay. She first appeared as a carefree little girl in Season 1. The stills from the upcoming season show her as a fierce young woman, trying to live through her latest ordeal. From being the Khaleesi to the Queen, Daenerys has been on quite a trip. Her character on Season 1 was a meek little girl completely under the control of her ambitious brother. However after conquering cities, taking over the entire Unsullied Army and sitting on the throne of Meereen, the Daenerys of Season 5 is a completely different person. She is last seen being held captive by the Dothraki army. The fate of Jon Snow hangs in a balance. Is he alive, is he dead? The speculation continues. Jon Snow in Season 1 was an eager little kid, hoping to join his uncle Benjen Stark on the Wall protecting the seven kingdoms from whatever ‘winter’ might bring. He is last seen being stabbed by his band of brothers due his infamous decision of allowing Wildings south of the Wall. Yes, she was always evil and nothing much has changed. But while the Cersei of Season 1 had no fear of consequences, the Cersei now has survived through the deaths of her two children and the Walk of Atonement imposed as a punishment by the High Sparrow. In the trailer for Season 6, we see her once more in control and opting for violence. Cute as a button, the tom boyish, Arya Stark of Season 1 has had a lot to learn. From being taken captive by Lannister army, to the kidnapping by the Hound, and then finally reaching Braavos, Arya Stark managed to cross one name of her list. That, however led her to being blind and that’s how we left her last. Things don’t look too good for her in the trailer either. After being AWOL for the entire Season 5, Bran Stark is all set to return to the series. He was a feeble little cripple in Season 1. But he took the painstakingly long journey North of the Wall and was last seen escaping the wights and finally meeting the Three Eyed Raven. His appearance in the Season 6 trailer shows him face to face with the White Walker King. He is everyone’s favorite character and has so far survived (we hope for long). Tyrion has never had it easy. Disliked by almost everyone, Tyrion lives life by his own rule. In Season 1, he is the carefree, youngest son of Tywin Lannister with money to throw around. But toughened by various events, Tyrion is now more responsible and acts as a counselor to Daenerys. He is in charge of Meereen during her absence. No character has ever instilled more hatred and then sheer pity from the audiences than Theon Greyjoy. He is the slimy pageboy of Ned Stark, who briefly takes over Winterfell, only to be taken hostage by Ramsay and tortured endlessly. He is last seen helping Sansa escape. Yes, nobody liked her when she first appeared. She was the epitome of evil and extremely creepy (yes the shadow baby, we’re thinking of that too). Come season 5 and her being responsible for the death of Shireen Baratheon, Melisandre once more earned our hatred. But, it seems viewers are ready to forgive her if she resurrects Jon Snow. Time will tell. Jamie Lannister’s image, from that of the evil Lannister twin, has come a long way. In Season 1 he is seen pushing a child out a window to his death. In the trailer for Season 6 he is seen lamenting the death of his daughter Myrcella. Which character is your favorite? Do you think they will survive Season 6?