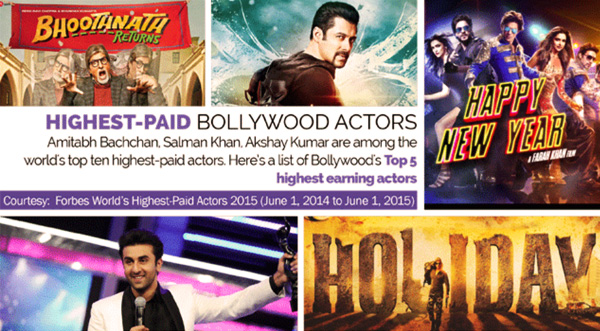 With stars like Shah Rukh Khan, Amitabh Bachchan and Salman Khan, Bollywood is one of the most promising global film industries which generates several big budget movies annually. The charismatic, celebrity-studded world of Bollywood is oozing with magical stars who are constantly under the limelight.

Without further delay, check out the  Forbes list of top 5 highest paid Bollywood actors for the year 2015:

The Big B of Bollywood may be old; however he is still one of the highest paid Bollywood actors of 2015. Big B had a successful year earning $33.5 million as Boothnath Returns hit the screens this year and became quite a success. His popularity increased due to his television presence in Yudh, a popular Indian TV show. Making his comeback through Kaun Banega Crorepati, the actor is known as the Shehanshah of Bollywood. The actor is in demand for event launches, brand endorsements and movies.

The superstar Salman Khan is in the same league as Mr. Bachchan, earning a total of $33.5 million and is worth every penny! Salman Khan rocked the box office with the hit movie Kick which was released on Eid 2014 followed by another major box office hit in 2015, Bajrangi Bhaijaan. A much-awaited venture by Salman Khan is his upcoming project with Sonam Kapoor, Prem Ratan Dhan Payo slated to release this year. The fans are expecting wonders and we know Dabbang Khan will not let us down!

With a net worth of $32.5 million for 2015, the Khiladi Kumar has done wonders! After an amazing run at the box office with movies like Holiday and Singh is King, the actor has also given three successful hits in 2015 with releases like Gabbar, Brothers and Singh is Bling. He has come a long way to become one of the highest paid Bollywood actors and is hard work and persistence are surely paying off!

Another worthy mention in the list is the Baadshah of Bollywood, the King Khan, SRK! However, a long-standing presence in the Hindi cinema, Shah Rukh Khan had Happy New Year as the only release in 2014, which was a huge hit. He earned $26 million for 2015 and has been placed 4th in the current list. The King of Hearts has set to feature in much awaited upcoming ventures like Raees and Dilwale.

Ranbir is the most sought after Bollywood actor of the new generation; with blockbuster hits like Barfi and Yeh Jawaani Hai Deewani in 2014, the actor has proved his worth and became one of the highest paid celebrities in a very short span of time. Even though Ranbir did not deliver hits this year, he raked in $15 million according to the Forbes List of Top 5 Bollywood Movie stars of 2015 and persists to be the most sought after Bollywood stars.

What do you think of this article? Let us know in the comments below!