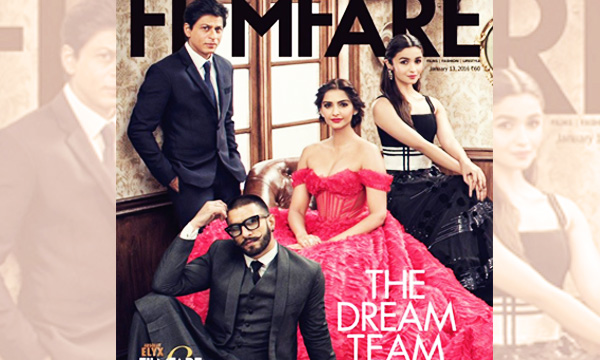 In order to pay tribute to the winners of Absolut Elyx Filmfare Glamour and Style Awards 2015, Filmfare magazine is to feature the ‘dream team’ i.e. the winners of the awards on the cover of their January issue.

The dazzling winners selected to be on the cover of the Filmfare January issue are SRK, Sonam Kapoor, Alia Bhatt and Ranveer Singh. The celebrities totally stun on the cover, exuding poise, elegance and grace.

The rest of the celebrity winners from the event are Athiya Shetty, Jacqueline Fernandez, Rekha, Sonakshi Sinha, Varun Dhawan and more. The celebrities also posed individually with their awards for the Filmfare Magazine; here are the shots! They look absolutely stunning, don’t they?

Some of the other winners from Absolut Elyx Filmfare Glamour and Style Awards 2015 are shown in the image above. This Filmfare Magazine issue is to hit the market in January 2016. Can’t wait!