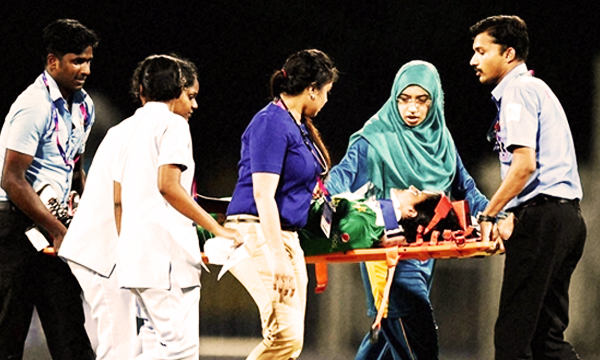 Pakistani batter Javeria Khan was struck hard on her neck, right below the ear and instantly collapsed. She was then stretchered off to the dressing room and to the hospital. The match witnessed a smaller crowd as audience. Pakistan were chasing a total of 104 while openers Javeria Khan and Sidra Ameen batted first. Upon Shamilia Connell’s fifth ball, a ball rose and hit Javeria on the jaw pretty hard. Sidra Ameen immediately signaled towards the camp, calling for a stretcher.

After moments of uncertainty and panic, Javeria became unconscious and was taken off the field on and towards the hospital for a CT scan. The scans revealed her stable and no major internal injury was shown.

However, she will still be kept under observation for one more day. West Indian bowlers made sure that Pakistan faces defeat. Eventually Pakistan lost by 4 runs with 5 lost wickets.

We were v.concerned about Javeria's health. It's the first time this has happened in the side. But I'm proud we fought v.hard – #Pak's S Mir

We thought she (Javeria) wasn't breathing. It was a shock! The bowler went all the way to boundary thinking what've I done! – #WI's S Taylor

Final update on Javeria: She was hit on the jaw, CT Scans show she's fine. She'll be kept under observation for a day though #WT20 #Pak #WI

In other news, #Pak women being cheered on with 'Pakistan! Pakistan!' cheers at the MA Chidambaram Stadium, #Chennai. Beautiful scenes #WT20

No updates on Javeria Khan's condition yet. Only thing we know is that she's been taken to hospital. #Pak v #WI women's #WT20 @WisdenIndia

Javeria khan Wudood debut in T20I against Ireland in May 2009 at Dublin; she played her fifth ICC WT20. Javeria has played in 16 ICC WWT20 Pakistan’s matches since 2009.