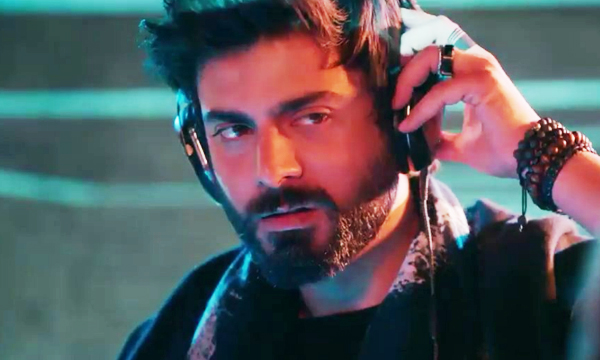 The second most anticipated song ‘Bulleya’ featuring Amit Mishra and Shilpa Rao from Karan Johar’s directorial venture ‘Ae Dil Hai Mushkil’ is out and Fawad Khan’s look in a DJ avatar will leave you wanting for more!

While it is just a mini glimpse of our favorite Khan in the Sufi love song, it is all that we could ask for! Sharing an intense moment with Anushka Sharma, the chemistry between then oozes with passion and longing.

See the soulful track for yourself here.

We also cannot stop gushing over Ranbir Kapoor’s new look! He can be seen crooning to the track Bulleya while his band rocks in the background. Plus, his bold scenes with the seductress Aishwarya Rai has set he music video on fire! What is more, the title track of the movie by Arijit Singh already created it’s magic all over! You will totally fall in love with the chemistry between all the stars. Ranbir’s steamy scenes with both Aishwarya and Anushka have intrigued the audiences just enough and they cannot wait for the film to release.

The highly awaited romantic flick will be hitting the screens on October 28th 2016. With some of the top actors of Bollywood Aishwarya Rai, Ranbir Kapoor and Anushka Sharma set to star in the upcoming film, never has excitement been more on the rise before.