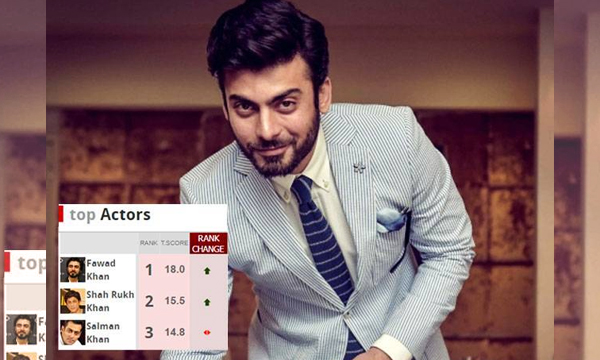 After taking over the top spot on the Times Celebex list and outranking celebs like Shah Rukh Khan and Salman Khan, Fawad Khan has now made us proud yet again! He has now made his way on another celebrity list in India.

The list of ‘Top 50 Most Desirable Men 2015′ was recently revealed by Times and our very own Pakistani heartthrob is has made the list and is amongst the top three stars! Even though the high- on-energy Bollywood actor Ranveer Singh and the Indian heartthrob cricketer Virat Kohli have gained the first and second spot on the list, our Pakistani hunk Fawad has been ranked aboive Hrithik Roshan, Sidharth Malhotra, Ranbir Kapoor, Shahid Kapoor and Varun Dhawan.

Fawad Khan sure had a list of goals to achieve in his acting career and with his sexy looks and absolute performance, the dreams have surely turned into reality. Time Celebex, Bollywood’s one of the top rated indices has ranked the Pakistani heartthrob Fawad Khan as the most liked actor of the Bollywood Industry.

Not only did he manage to make its place to the top of the Bollywood index, but he also outranked super-hit actors SRK and Salman Khan in terms of fame, popularity and fan following. It seems like Fahad Mustafa’s decision of introducing Fawad Khan to the Bollywood industry proved to be quite beneficial.

Fawad’s debut Khoobsurat made him attain fame in the Bollywood world and moving on to Kapoor and Sons, the actor managed to make a crowd-pleasing fan following not only in Pakistan but all over the world.

Fawad Khan Wants to Be a Rockstar Again

On the other hand, Priyanka Chopra with her international debut in Quantico and her Box Office performance in the Bollywood movies made her win the top position in the Times Celebex Bollywood Index. Following her was the youngest star of the Bollywood Industry Alia Bhatt who attained popularity and a fan following with Kapoor & Sons.

Time Celebex is a rating index for Bollywood actors and actresses that measure the ability, fan following and popularity of the stars by calculating the T-Score in a scientific ranking system based on data collected from 60+ publications and 250+ TV channels, making it the first ever ranking system for Bollywood.