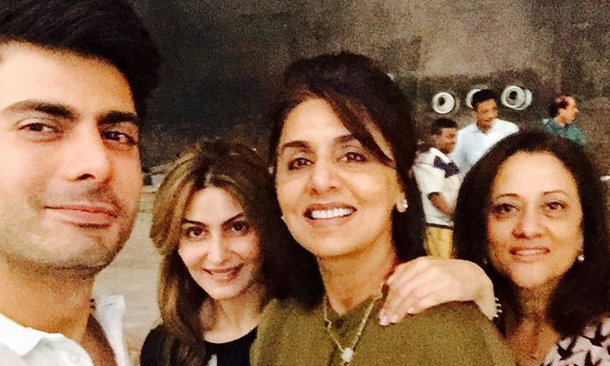 Fawad Khan has been reaping special attention in Bollywood since he starred in the Indian movie Khoobsurat. Not only fans but celebrities are also very enthusiastic towards meeting Pakistan’s most popular superstar.

His latest count from the Bollywood industry involved Neetu Kapoor, actress and wife of Rishi Kapoor and her daughter Riddhima Kapoor Sahani. All three of them met him on the sets of Karan Johar’s upcoming film ‘Kapoor and Sons.’

Neetu Kapoor, on her Instagram account, posted a selfie with Fawad Khan and her daughter, describing it as her ‘fan moment’with the Pakistani heartthrob.

On the other hand, Neetu’s daughter Riddhima also grabbed an opportunity to click a selfie with a sweetheart actor of both Pakistan and India’s cinema industry.

Fawad Khan May Still Be in Battle For Bittora Movie?

The movie Kapoor and Sons will be released in the month of March next year, as revealed by the producer of the film Karan Johar himself on Twitter.