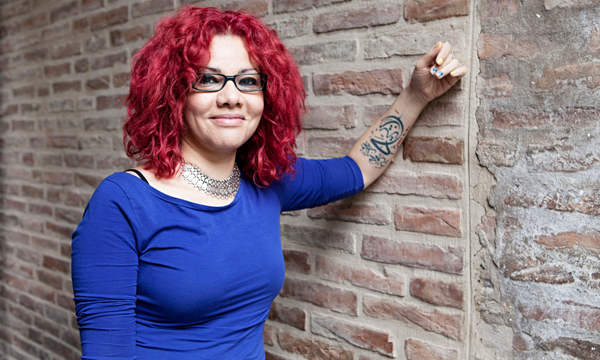 A feminist author hit back Monday at Pakistan for censoring her article on Muslim women and sex, saying the ban exposed the depth of gender discrimination in the deeply conservative Islamic country.

Egyptian-American Mona Eltahawy, an award-winning journalist who is a vocal public speaker on women’s rights, penned an opinion column entitled “Sex Talk for Muslim Women” that ran in Friday’s edition of the International New York Times.

The article was available online in Pakistan, but the newspaper version, published by the local Express Tribune, featured a blank spot in the opinion pages where Eltahawy’s article had been.

Eltahawy told AFP that the decision to ban her article exposes that authorities think a woman “who claims ownership over her body is dangerous… and must be silenced”.

“You can’t afford to publish such controversial articles about Islam,” a senior source at the Express Tribune told AFP on condition of anonymity when asked about Eltahawy’s article.

In the piece, Eltahawy discussed her decision to have sex before marriage in defiance of her own upbringing and faith, and detailed her many conversations with other women of Muslim and Arab descent suffering under the “sexual straitjacket” of virginity imposed on them by men.

“Where are the stories on women’s sexual frustrations and experiences?” she wrote.

“My revolution has been to develop from a 29-year-old virgin to the 49-year-old woman who now declares, on any platform I get: It is I who own my body. Not the state, the mosque, the street or my family. And it is my right to have sex whenever, and with whomever, I choose.”

Women have fought for decades to establish rights for themselves in Pakistan, where so-called honour killings and acid attacks remain commonplace.

Last week a teenage girl in the country’s northwest was strangled and her body set ablaze after a village council ruled she must die for helping a friend to elope. The killing sparked fresh anger from rights activists.

Eltahawy said the censorship showed “a woman who disobeys and who openly claims sexual liberation and pleasure is dangerous and must be silenced”.

She cited backlash in the country to Pakistani director Sharmeen Obaid-Chinoy’s Oscar win in February for a documentary about honour killings.

“So many Pakistanis attacked her for making Pakistan ‘look bad’ and not enough attacked what is actually making Pakistan look bad: men who are ready to kill women for daring to believe they have the right to consent and agency over their bodies.”

Conversations about Muslim women and sex must be had, she said, adding she was unaware if the article had been censored in any other country.

“That sex is happening but shrouded in taboo and shame… As women of colour and women of faith, we need to see women who look like us. Sex-positivity isn’t the domain just of white feminism.”

But, she said a recent trip to Lahore for a literary festival introduced her to “wonderful young feminists” who “keep my tenacious optimism intact”.

“The more feminists such as the ones I met push, the greater the space they’ll create for everyone.”