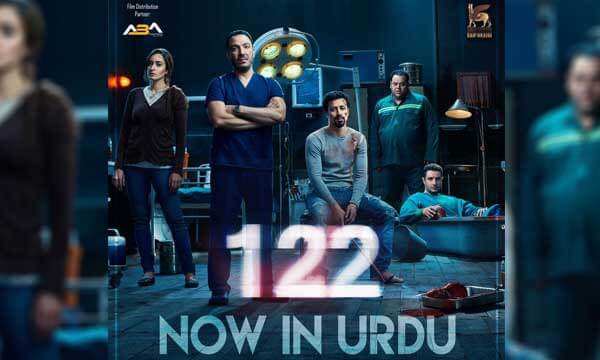 Pakistan has always been a profitable market for films be it English or Indian and with the introduction of 122, even Egyptian films. The Arabic movie dubbed in Urdu may not have done a phenomenal business but it made a lasting impression that might help more film directors from the Middle East submit their films for release in Pakistan.

The most important thing about the Arabic films dubbed in Urdu is that their actors resemble Pakistanis and so do the locations that remind you of modern areas of Pakistani cities.

So why should one in Pakistan watch an Egyptian movie dubbed in Urdu when you have films from India as well as local ones gracing the screen in cinemas? The answer to that lies in 122 which is a far more technically advanced film than most of the films made in Pakistan or India.

Besides being the first Egyptian film ever to be made for 4DX Format, this edge-of-the-seat thriller keeps you engaged with its twists and turns.

Directed by renowned Egyptian filmmaker Yasir Al-Yasiri and featuring an ensemble cast including Ahmed Dawood, Tarek Lotfi and Amina Khalil, 122 is about a young couple (Nasr and Omnia) who finds themselves stuck in a hospital where Doctors are involved in selling organs of injured patients. There are many twists and turns in the story that is so relatable to us in Pakistan than it is in Egypt.

You have a corrupt Doctor who just wants to get rich by hook or by crook, there is a policeman who suspects something is wrong but can’t figure it out, then there is a Nurse who looks and acts suspiciously for the wrong reasons.

The film’s cinematographer Ahmed Kardous does a fine job and does justice to the script by Mohammad Nasar who does his best to keep the audience involved in the story. Yes, there were a couple of situations that could have been handled better but not knowing the end, or the fate of many characters was enough to grab the attention of the audience.

Making the protagonist woman deaf and the man injured, the writer and director weaved the magic that was only broken by the happy ending which at one time didn’t look a possibility.

All the actors who dubbed for their Egyptian counterparts must be commended for doing a fantastic job. The crowd didn’t turn up because they had assumed that an Egyptian film dubbed in Urdu would be bad, but trust me, it was far better than many thrillers made in Pakistan. It was shot like a Hollywood film, acted like a Bollywood one and had a storyline that twisted and turned like a Pakistani film.

It seems that in coming years, dubbed films from the Arab World would be considered a big deal and the audience who watch such films would come out as the wiser since they would be accustomed to the best films from the Middle East.