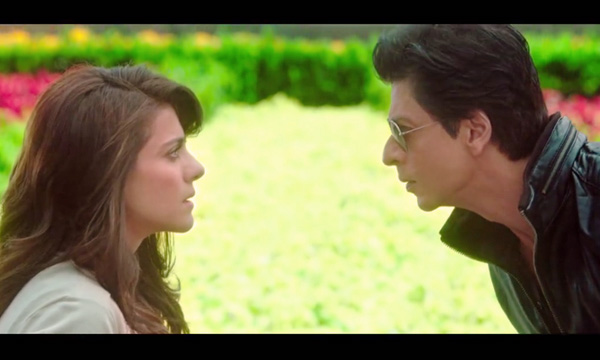 Shah Rukh Khan’s ‘Dilwale’ has released the second trailer of the much-awaited Bollywood extravaganza. Watch the trailer below:

Directed by Rohit Shetty, Dilwale is a family entertainer with a perfect blend of action, romance and comedy. Produced by Red Chillies Entertainments in association with Rohit Shetty Productions Dilwale boasts a star cast including the iconic Shahrukh Khan, Kajol, Varun Dhawan and Kriti Sanon in lead roles.

Shah Rukh Khan said “Since Kajol and I are coming back together on-screen after years, Rohit felt that we should try and make Gerua stand out better than all the other songs we have done earlier. We have done many beautiful songs and are really fortunate to have done those. But Rohit was very clear and precise about how he would like to shoot this one. He paid attention to every detail starting from the choice of location, costumes and every other technicality because it was essential to him.”

The poster video consists of a ‘D’ with a heart in it; however this time the teaser comprises of a melodious song playing in the background while the two on-screen lovebirds seem high on chemistry.

This motion teaser consists of a tuneful track frolicking in the background while Kajol and SRK are seen swaying inside the frozen ‘D’.

The team of “Dilwale” has tried to hold the suspense intact for a long time since none of the three posters released previously, failed to reveal the first look of the stars.

The romantic duo can be seen dancing on a huge piece of floating ice right in the center of a semi-frozen water body.

‘Dilwale’, directed by Rohit Shetty is one of the most anticipated movies of the year as the fans anxiously wait to admire the most sought-after duo back on screens.

Besides SRK and Kajol, the flick is also featuring Kriti Sanon and Varun Dhawan, playing the part of SRK’s younger brother.

Stay tuned to Brandsynario for further details and updates about the movie!