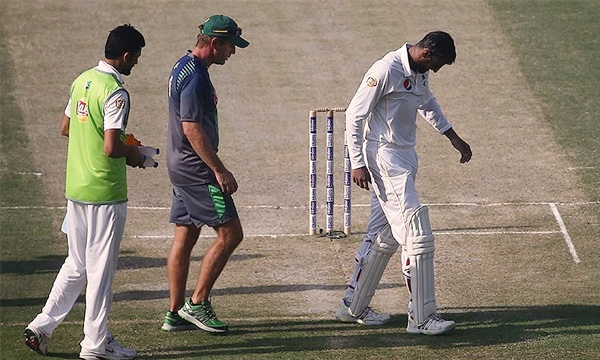 After hitting his highest score in test cricket, Shoaib Malik fell ill due to the scorching heat in Abu Dhabi. He was given a glucose drip to treat his dehydration and is fine now. His innings at the Sheikh Zayed Stadium lasted more than 10 hours where he scored a whopping 245 runs after facing 420 balls.

This was Shoaib Malik’s first test match in five years and his double ton has put Pakistan in a commanding position on the second day of the first Test against England. He also broke the record of fifth-wicket partnership and shared 248 with fellow centurion Asad Shafiq (107).

Malik hit 24 boundaries and four sixes in the searing temperature before smashing a Ben Stokes delivery straight into the hands of Ian Bell at the mid-wicket. His previous highest record was 148 not out against Sri Lanka in March 2006.

Chasing a mammoth Pakistan first innings total of 523-8, English openers Alastair Cook and Moeen Ali batted firmly to minimize the spell cast in the stadium by the Green Shirts. They made a great start and were 56 without any loss at close of play. Alastair Cook remained not out on 39, while his new opening partner Moeen Ali was unbeaten on 15.