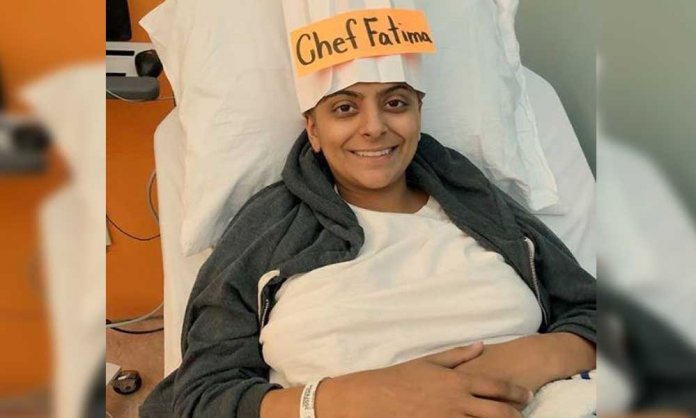 Fatima was diagnosed with a rare form of bone cancer that metastasized with time.

This strong ambitious lady strongly fought a prolonged battle with cancer. Even though the doctors told her that she had a very little time left, Fatima continued to embrace her dreams and became an example for everyone.

Just a couple months before her death, Fatima Ali wrote an emotional note to her 18 years old self that got featured in an American TV show.

Fatima poured her heart down in this gut-wrenching note and expressed all her wishes that she wanted her younger self to do.

From her career as an aspiring chef in the U.S. to her overwhelming journey of chemotherapy, Fatima pored her heart out in the letter.

She wanted her younger self to know that she might not see her 30th birthday and the worst thing she had to experience in these years was to live with uncertainty every day.

I know it’s been ages since I posted and most may have figured out why. I’m sick and unfortunately I’m getting sicker. Right now all I need are prayers; prayers that are simple. I hope, because a wish is putting on too much responsibility on the other, that you will somehow find forgiveness in your big heart for whenever I must have hurt you. I thank you a million times over for when you have given me joy. I’ll try to keep everyone updated the best that I possibly can.

The talented lady also shared that the support of her friends and family is the most beautiful thing in life.

Watch the whole video below!