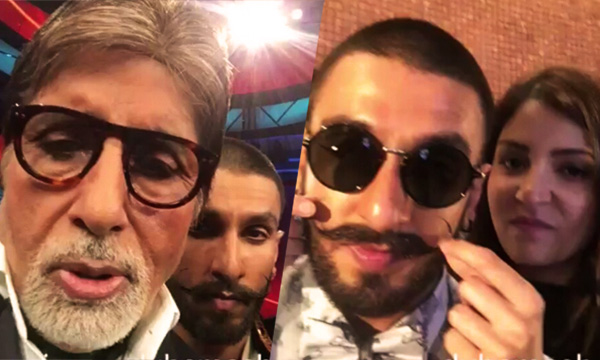 Bollywood actor Ranveer Singh has come up with an innovative idea to promote his upcoming movie Bajirao Mastani. With the huge popularity of Dubsmashes and his ever-growing love for the mobile app, the actor is spotted with Indian stars and Bollywood celebrities recording Dubsmashes of his epic dialogue.

Sourav Ganguly ended up dubbing the dialogue with an adorable smile.

Known for his goofy and hyperactive nature, Ranveer Singh kicked off this trend while visiting Amitabh Bachchan’s show ‘Aaj Ki Raat Hai Zindagi’ last week. The quirky actor requested the legend to get his dialogue Dubsmashed.

Bollywood’s mega star Dubsmashed the famous dialogue and the video gained huge popularity. Among all the celebrities, Mr Bachchan has lip synced his dialogue the best.

Bajirao Mastani is all set to hit the theaters on December 18 and will clash with Shah Rukh-Kajol starrer Dilwale. The historical romance film is directed by Sanjay Leela Bhansali and features Deepika Padukone, Ranveer Singh and Priyanka Chopra in lead roles.