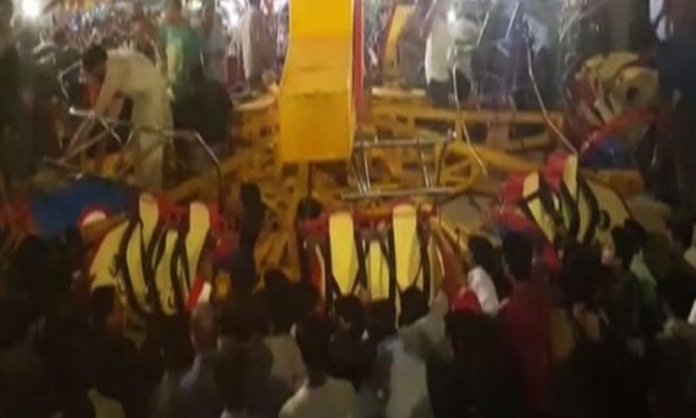 In an unfortunate accident, 12-year old Kashaf lost her life. The child went to Askari Park, which very recently was inaugurated on Eid-ul-Fitr, and became the victim of a fatal accident.

She and several others were taking rides, one of which had a sudden suddenly collapsed, leaving the survivors injured.

The cause of the swing’s collapse could not be detected immediately, however, the eyewitness who spoke to a local news channel said the swings were overloaded.

Mayor Karachi Waseem Akhtar has demanded an inquiry to be held in regards to who is responsible behind happened. He also added that the park had opened without any safety measures or tests.

“I don’t know who is overseeing the affairs of this park. It was earlier operated by KMC and then we handed it over to the cantonment. This is the park administration’s mistake. They should not have allowed children to take rides,”

Earlier, a rumor of the Ferris Wheel collapsing also went viral. Many news publications and website claimed that it was a part of Askari Park, however, the amusement park soon rolled out a statement clarifying that the incident was in India and not in Karachi.

Is anyone answerable in this country? out short term memory lost nation will forget that incident shortly. We dont ask questions that why and how this happened? we dont take any incident seriously. Its just news for us. We have actually dead people….

Sad incident at Askari Amusement Park. I think that all announcement parks (with rides) must be closed till we make or adopt an international level safety standard. Nothing beyond a human life. Safety first! 😕#AskariPark #AskariParkAccident

are you SERIOUS?? A CHILD died last night at an AMUSEMENT PARK. Why? Because we don’t have laws that regulate the safety of these rides. Stop trying to ‘modernize’ Pakistan when you can’t run a goddamn amusement park without killing children. SHAMEFUL. #AskariPark

so who is going to jail for killing a girl? and injuring others #AskariPark

Tragic that a Ride “collapsed” or “Fell” at Newly-inaugurated #AskariPark ,Karachi .
A teenage girl died, one person is critical & at least 8 injured.

Responsibility for Negligence must be taken.
Technical issues arise in rides, but soon after Inauguration…? Questionable ! pic.twitter.com/8ZSd5FCrjP

Is there any place in Pakistan where Pakistanis can feel safe and happy? This #AskariPark incident is horrible. Prayers for #Kashaf_Samad who lost her life in this tragic incident.#RIP_Kashaf_Samad

Unlike previously, Askari Amusement Park’s management has not rolled out an official statement as of yet.

Who is responsible for this negligence in your eyes?