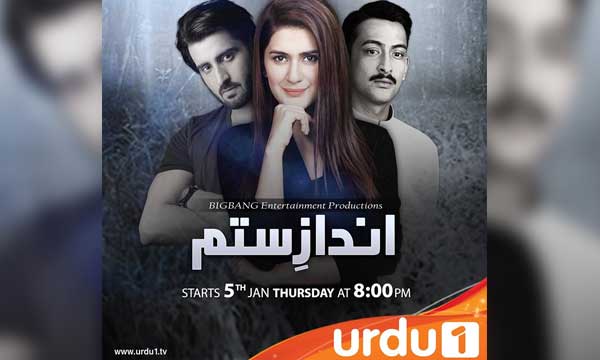 Urdu 1 lives up to its tradition of providing viewers with quality entertainment along with highlighting some of the less talked about social issues prevalent in our society! Marital rape is one such heinous issue of our society that is ignored by all! In fact, some are of the opinion that there is no such thing as ‘marital rape’. Can you believe that?

As the powerful first look of the drama reveals Agha Ali and Faaris Shafi’s characters are both madly in love with Aayat but Aayat is one free-spirited girl who can’t be chained! We can see after Khuda Mera Bhi Hai, Irsa Ghazal has gotten used to playing a vamp remarkably well!

The second teaser reveals how love can turn into obsession and then madness! Watching Agha Ali play a negative character will be truly refreshing!

Directed by Ali Hassan and written by Inaam ul Hassan, Urdu 1’s Andaz-e-Sitam tells the story of a young and independent woman, Aayat who becomes a victim of marital rape and undergoes several hurdles in life.

#AndazESitam starting from 5th January every Thursday at 8:00 pm only on #Urdu1

Will Aayat ever come out of this marriage? Will this make her even stronger? Watch the drama every Thursday at 8.00 pm, starting 5th January 2016.

Several women in Pakistan are living with abusive husbands and are clueless about how to deal with such a problem. This serial may have come as a ray of hope, guiding them towards the right direction.

Stay tuned to Brandsynario for more news and updates on Andaz e Sitam. This one’s a must watch!