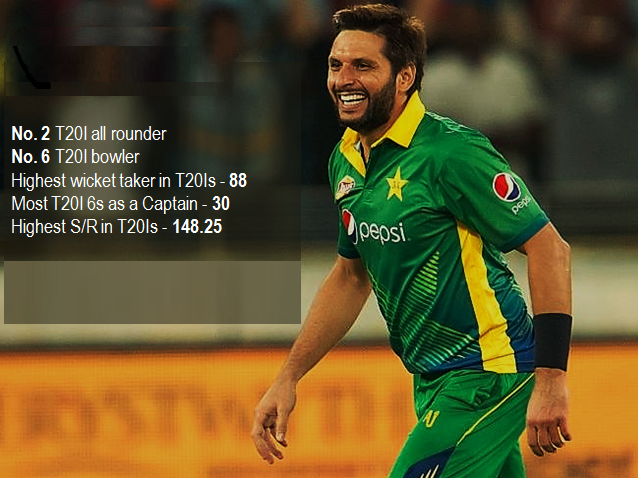 Pakistan T20 Captain Shahid Afridi has improved his ranking despite the team’s collective lost in the T20 series to England by 3-0.  The 35-years-old all-rounder  has moved up to the second  position in ICC T20 All Rounder Rankings after his outstanding individual performance with both, bat and ball.

The all rounder took five wickets in the three match series and played two blistering knocks of 24 and 29 runs in the 2nd and 3rd T20 respectively, but ended up from the losing side that dropped down to sixth position in ICC T20 rankings. Shahid Afridi with 88 wickets has also become the Leading Wicket Taker in T20 in second T20 match against England leaving behind his country fellow Saeed Ajmal (85). In the ICC T20 Bowler Rankings, Afridi is on sixth by climbing up three positions__ the highest ranked bowler on either side after this series.

But as they say,  all’s well that ends well; unfortunately, Shahid Afridi could not led his side to the victory and that’s why he is under the axe of criticism these days as experts are raising fingers on his fitness and position as captain in the upcoming T20 world cup.

Former South African cricketer Herschelle Gibbs has remarked that “Pakistani side will get the right direction when Afridi’s career will be over”. Ex-Chairman PCB, Ijaz Butt commenting on Afridi’s place in the T20 team as skipper has said “It is up to Shaharyar Khan now to decide Afridi’s fate”.

The mega event of ICC T20 World Cup 2016 will commence from 11th March in India,  it is yet to be seen if PCB  will retain Afridi as a captain or look for a better decision.