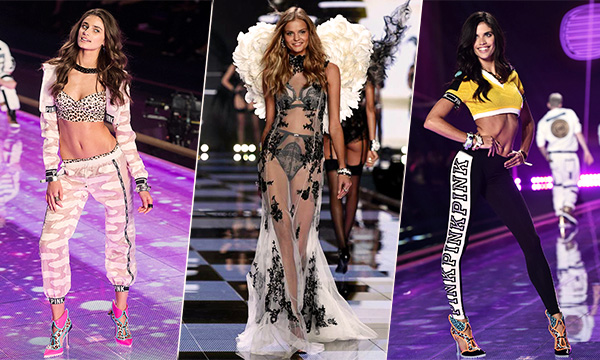 When the Victoria’s Secret Angels return to the catwalk to record The Victoria’s Secret Fashion Show 2015 on Tuesday, it will be a milestone show for the 10 models promoted this year to ‘Angel’ status. So who are the lingerie brand’s 10 new ‘Supermodel Angels’? We investigate.

Swedish model Elsa Hosk started out as a professional basketball player but since switching full-time to modelling has worked with Dior, H&M and Dolce and Gabbana.

She has been a spokesmodel for the VS sister line ‘Pink’ since 2012.

Green-eyed Polish beauty Jac Jagaciak is known for her advertising work with Chanel and Louis Vuitton among others, and has walked in shows for Balmain, Ralph Lauren and Michael Kors.

Russian ballroom dancer Kate Grigorieva has strutted her stuff on the catwalk for Givenchy, Versace and Gucci, to name just a few.

Brazilian model Lais Ribeiro has seen her star rocket over the past few years, thanks to advertising campaigns with ad campaigns for Ralph Lauren, Christian Dior and Tom Ford.

Not to mention walking for VS since 2010.

Dutch beauty Romee Strijd walked for VS for the first time last year, progressing swiftly to the rank of Angel. She has shot ad campaigns for Alexander McQueen and Donna Karan.

Sara Sampaio is known in her native Portugal for having won the national “Best Female Model” Golden Globe multiple times, as well as for her appearance in the 2014 Sports Illustrated Swimsuit Issue. UK native Stella Maxwell kicked off her fashion career with campaigns including Puma, River Island, Urban Outfitters, before being snapped up to walk in the VS show last year.

Colorado beauty Taylor Hill lists H&M and Forever 21 on her fashion CV. She walked in her first VS show last year.

The Victoria’s Secret Fashion Show will air on December 8 on the CBS Television Network.