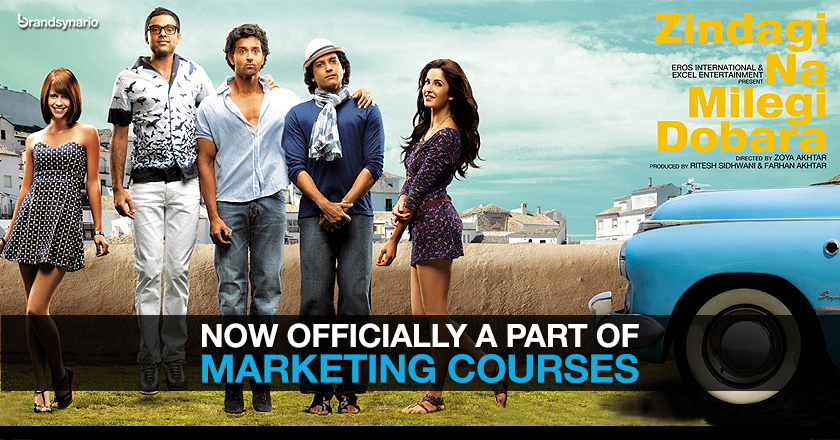 Zindagi Na Milegi Dobara (ZNMD), an unconventional Bollywood flick that became a super hit, has now been made a part of Spanish Colleges’ Syllabus.

ZNMD a project of Zoya Akhtar, features a story of three friends, a crazy entertainer aka Farhan Akhtar, a ambitious businessman aka Hrithik Roshan and a simple yet confused about-to-be-married bachelor aka Abhay Deol.

ZNMD has not only added a completely new chapter to Bollywood’s history but has also made it one of best and most memorable ones. The project was so effective that it increased the tourism in Spain – the country where the film was shot by a staggering 65%.

Looking at such unintentional and huge increase in numbers, Spanish authorities came to the conclusion of adding ZNMD as a case study for marketing courses taught in some of Spain’s most prestigious and renowned colleges.

The movie’s storyline is based on the trip where these three musketeers reunite to celebrate Abhay’s bachelorette holiday, which encompasses of three crazy experiential trips, each one entailing one of the friends’ most dreaded fear of life. The beauty of this movie is that most of its stunts were actually performed by the artists themselves and each accompanied by a post-event-poetry of Farhan Akhtar himself; made the film an epic hit.

Carefully planned and brilliantly executed, ZNMD not only features some of the exciting and secretly desired experiences of one’s life, but also shows much of Spain’s hidden beauty including some of the rarest most traditions of Spain like the “TOMATINA” festival; which became an instant hit, a proof of which came from the miniature imitation that took place in various countries around the world including Pakistan.

Made compulsory, ZNMD as seen by the Spanish authorities is a typical example of how effective countries brand positioning should be done within films, a thing which gave Spain a lot of business, no doubt.

After the outstanding success of ZNMD, Zoya Akhtar’s upcoming project of Dil Dhadakne Do with Excel Entertainments is the next most awaited Bollywood projects of 2015.