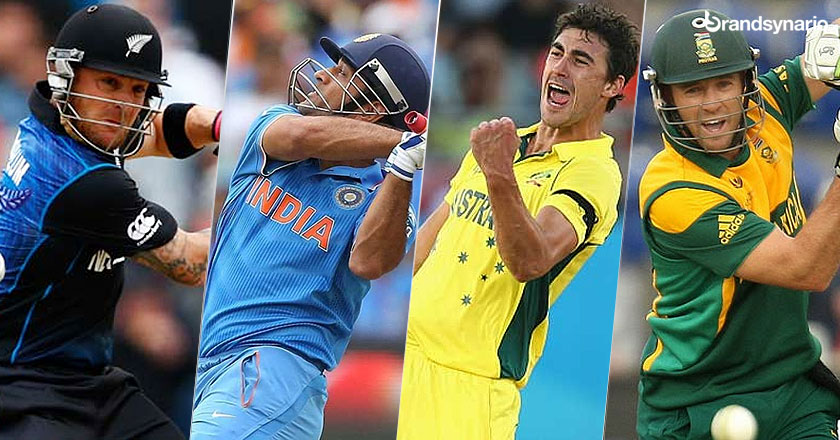 The fight to reach Melbourne for the 2015 ICC Cricket World Cup final is well and truly on for all the cricketing nations aiming for the biggest prize of the sport has to offer.

From New Zealand’s audacious victory over neighbors, and rivals, Australia in arguably the most thrilling low-scoring game witnessed in recent history, to Bangladesh’s valiant display to knock England out of the World Cup itself, cricket lovers from all over the world have been treated to some exhilarating matches during the course of the international cricketing extravaganza jointly hosted by New Zealand and Australia.

With New Zealand and India still unbeaten in the tournament, they are the punters’ favorites to meet each other in the Final on March 29. However, a team’s form goes out of the window once the knockout phase starts, as the best team on the day wins, making no team as the odds-on favorite to win the title of World Champion.

India, New Zealand, Sri Lanka, Bangladesh, and South Africa have already qualified to the quarterfinal stage of the competition, with Pakistan, West Indies, and Ireland fighting for the two spots left. However Ireland and Pakistan remain favorites to qualify to the first knockout round from the remaining Pool B spots.

So who are the top four contenders for the big trophy? Here we look at all the teams, their strengths, and their chances of winning the big one.

The Kiwis are unbeaten still, winning all 5 of their group matches, including a low-scoring thriller against fellow host nation, Australia. In Tim Southee, Trent Boult, and veteran Daniel Vettori, they have one of the most deadly bowling attacks, backed by the brilliance of their captain Brendon McCullum and Kane Williamson, the New Zealanders, so often called the dark horses, have been a potent force that does not appear to be slowing down.

Current holders of the cup, and determined to valiantly defend their title, the sub-continent giants are a force to be reckoned with. Like New Zealand, they have yet to taste defeat in the competition, easily brushing aside every team that has come in front of them. In Shikhar Dhawan, Rohit Sharma, Virat Kohli, and Ajinkya Rahane they have of the most fearsome top order batsmen in the world today, coupled with the leadership of arguably one of the greatest ODI players of the game, MS Dhoni, and the lower-middle order batting of Suresh Raina and Ravindra Jadeja, no target set is big enough for the Indian batsmen. In Ashwin, Shami, and Yadav they have an equally balanced bowling attack, and that is why the Indian team is known as a raging juggernaut.

Beaten soundly by Pakistan and India in their Pool B games with the subcontinent giants, the Proteas have one of the most balanced sides in world cricket today. Hashim Amla, Quinton De Kock, AB De Villiers, and David Miller are the spine of the team, while in Imran Tahir, Morne Morkel, and the ruthless Dale Steyn they have one of the most potent bowling attacks in world cricket today. On their day, the mighty South Africans can beat any team. However, the only weakness in their game is their ability to shoot themselves in the foot and commit unforced errors that eventually lead to unhappy endings to their matches. It is high time that the Proteas did something to bury their ‘chokers’ tag once and for all.

Host nation Australia, under the stewardship of Michael Clarke, are one of the favorites to lift the crown, having lost only once in the tournament (to New Zealand). Their batting has not completely clicked as of yet, but one would expect that to change sooner rather than later. In David Warner, Aaron Finch, and Glenn Maxwell they have three of cricket’s biggest hitters, and with the brilliant technical batting skills of Steven Smith and Michael Clarke, they have a decent batting line-up that can cause any bowling attack in the world numerous problems. The three Mitchells, Starc, Johnson, and Marsh, combine together to form a lethal bowling attack, that is not only brilliant in the start of the innings, but also extremely effective in the death overs. Expect carnage if the Aussies get going!

Pakistan and Sri Lanka narrowly miss out due to the supreme talents available to the top four favorites to the title. However, 2011’s runners-up, Sri Lanka, and semi-finalist’s, Pakistan, are two of the greatest cricket playing nations the world has seen, and it would be no upset if they manage to pull off big victories that take them to the finals ahead of the rest.

Whatever the outcome may be and whoever wins the World Cup in the end, the 2015 ICC Cricket World Cup would go down as one of the greatest sporting events in modern-day sports history! In the end, may the best team win!

(Fingers crossed – hope it is Pakistan!)