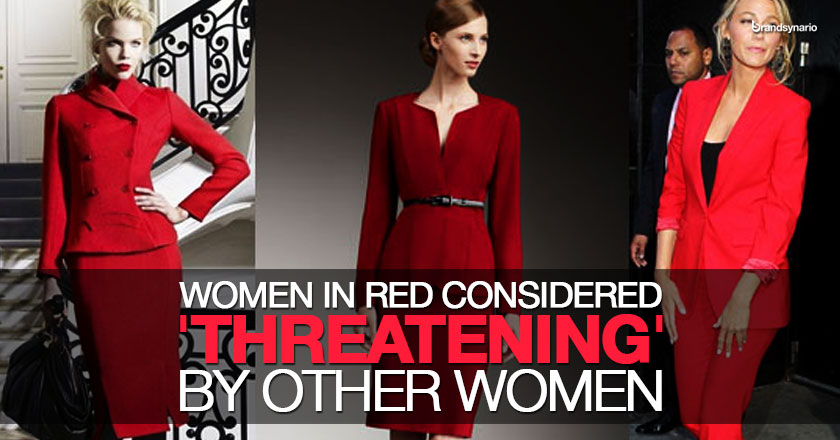 It has always been considred that men find the color ‘red’ innately attractive but recently researchers at the University of Rochester joined forces with Trnava University in Slovakia and the Slovak Academy of Sciences and found that women consider other women wearing the respective hue sexually threatening.

Infact, don’t be surprised if you wear red and your friend doesn’t introduce you to her boyfriend.

But does that mean you should not grab that red dress because your female friends see you as a threat?

“I don’t think it’s the case that women who wear red are always advertising sexual interest,” says Adam Pazda, a social psychologist at University of Rochester who led the study. “But there is evidence that people make judgments about other people in general based on clothing. You can see how color might easily fit into that.”

Three experiments have been carried out to determine several hundred women’s responses to images of a woman dressed variably in red, white or green.

The first experiment demonstrated that women perceive another woman in red as sexually receptive, compared to one in white.

The second experiment derived that women are more likely to view a woman wearing red as immoral.

And the third experiment concluded that women were therefore more likely to “guard” their romantic partner from a lady in red, compared to one in green.

After these findings, Adam Pazda said, “Certain colors may affect how people perceive us.”

“Men think red is attractive and sexually receptive. You might think twice about wearing red to send off the wrong vibes. If you are wearing red out and about, you might be perceived negatively by other women. It won’t happen in every situation, but be aware of the signals to other women and men that you’re interested in sex.”

So is wearing red worth the harm or charm? Well that’s for you to decide but remember one thing, you will surely end up messing psychologically with someone either way!