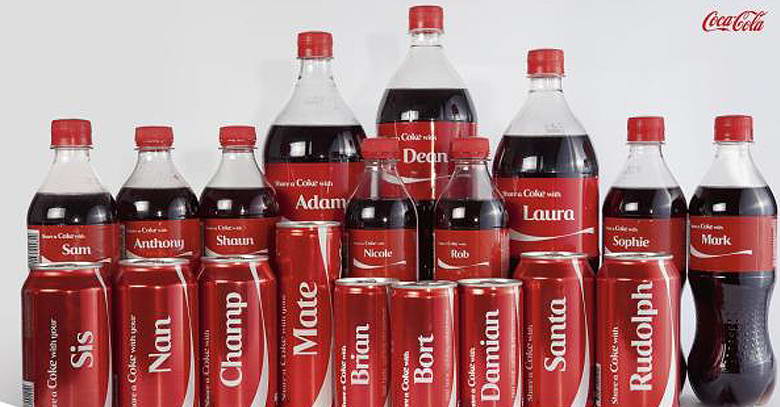 By Zulfiqar Ali Sajwani
The Australians did it. Then the British did it. And now the ‘Thai’ will do it. It seems that soon the entire world will be ‘sharing a Coke’ with each other,

Coca Cola is all set to spread the message of happiness in the tropical contours of the coconut country Thailand. This time, the leading cola brand is asking you to “Be Fizzy, Be Bold, Share a Coke”.

Investing an outstanding 140 million Bath, the entire Thailand will be flooded with 250 million Coke cans, having people’s nicknames and their expressions printed on them.

“We know that Thai people are positive and happy … But they are also very reserved about expressing how they feel about other people, especially when those feelings are mixed with special emotions or are particularly complimentary,” Konstantinos Delialis, marketing director of Coca-Cola (Thailand), said in his first interview with local media.

‘Share a Coke’ campaign is a marketing initiative by Coca Cola that started from Australia, and then went on to the UK, Italy, France, Brazil, Austria, Germany, Greece and Israel.

The summer campaign invited consumers to share a moment of happiness with friends, family and loved ones by swapping the iconic logo on the Coke bottles with personalized names. From user generated print names to social media sharing, the campaign has it all.

With the outstanding results on board, it would not be wrong to say that Coca Cola’s ‘Share a Coke’ campaign is one of the most successful global campaigns by the company till date.

Australian statistics of the campaign reveal that Young adult consumption increased significantly by 7%. The campaign also earned a total of 18,300,000-plus media impressions, and traffic on the Coke Facebook site increased by 870%, with page likes growing by 39%.

But the questions to answer are. What is the hidden secret behind the ‘Share a Coke’ campaign that is convincing the marketers of Coca Cola to stick with this campaign? What are the reasons behind such a simple’ campaign getting such an outstanding response?

A CAMPAIGN FOR EVERYONE!

While most of the soft drink campaigns speak to a certain age group, the ‘Share a Coke’ campaign speaks to everyone. Any consumer aged between 13-60 can essentially relate himself/herself to the campaign without feeling excluded.

From the kids to the seniors, Coke caters to every member of the family. Luckily for Coke, the diverse age group could relate to the campaign very well and hence, the campaign complemented Coke’s brand promise with finesse.

The hashtags and nicknames accompany us on our laptops and our Smartphones. The fact that social media has increased socialization, the ‘share a coke’ campaign took seamless advantage of it.

In the last few months, there has been a growing trend for friends and colleagues to spam Twitter and Facebook feeds with pictures of Coca-Cola bottles and cans. Each of these carried the hashtag #shareacoke to encourage users to promote the brand online.

Coca-Cola has seen its Facebook community grow by 3.5% and globally by 6.8%.

The hashtag has also been used 29,000 times on Twitter (Brandwatch, 2013) Hence, the campaign awarded the brand with social media visibility to a large extent.

Humans love when they see their prime identity, their name, appearing in the most random space.

Share a Coke campaign placed consumer’s names on the supermarket shelves and retail shops, places that are visited by the masses.

Keeping this fact aside, the feeling of ‘owning’ a coke gave butterflies in the stomach in even our imagination. ‘Share a Coke’ campaign managed to develop a relationship with the customer, something that every brand longs to achieve.

Although the idea of user-generated content has been in the market for quite some time now, the simplicity with which it was used by ‘Share a Coke’ campaign, earned the campaign wide acclaim.

‘Share a Coke’ created an ideal scenario of having a ‘tangible’ product with user generated content along with sharing it online with friends and family, truly a dream come true.

Share a Coke campaign initially started from Australia and went to over 50 markets. Each time the marketers introduced the campaign in a new field, they ensured that the past mistakes were not repeated and the cultures of the country were taken into account.

Delialis, the Marketing Director for Coca Cola Thaliand said Coca-Cola operated in 200 markets around the world and each market learned from the others. Therefore, the campaign evolved itself beautifully.

The marketers who conceived this campaign definitely deserve a round of applause for setting such an impeccable example for not just Coca Cola, but the entire marketing industry.