Home Articles What is the Most trusted form of Advertising
Advertisement 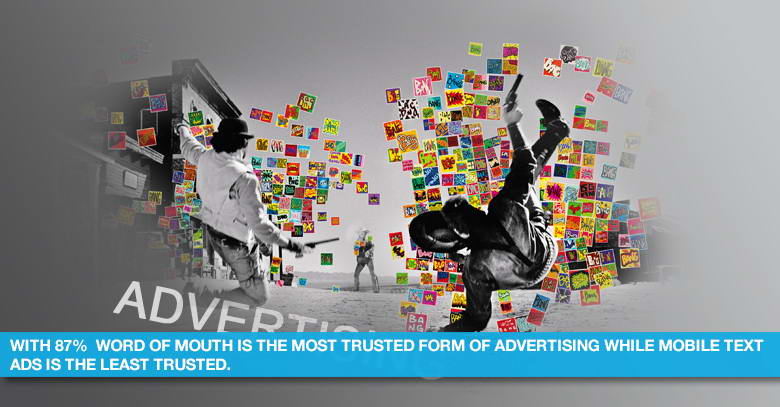 By Marium Ashfaq
Trusting advertisement? Do you ever wonder if consumers are now smartly being manipulated, or have ads started turning out to be more trustworthy than before?

According to the latest research by Neilsen, conducted by polling 58 countries, customers have started trusting advertisements considerably more than they did six years back.

Certainly, word of mouth is considered the most convincing form of advertising, nonetheless, people have now started to believe in other forms of advertisements as well. These include ads on television, websites, social networking sites as well as on banners and billboards.

Contrastingly, the “Global Trust in Advertising and Brand Messages”  reports slight decline in the consumers’ confidence in Newspaper ads, which has decreased from 63 to 61 percent from 2007 to 2013, respectively.

The research was conducted on 29,000 internet respondents, which covered 58 countries, and measured 19 different categories of paid, owned as well as earned ad formats.

Based on the results, the TV ads were termed trustworthy by 62 % in 2013, compared to an estimate of 56 % in 2007. Although, the trust in newspaper advertisements slightly fell, it still manages to be greater than what people place on magazine ads which is 60%, social networks are trusted by 48% people, billboards by 57% and online banners by 42% of people in the study.

Moreover, the research explored the style of advertisement which worked best in convincing its audience.

Result showed that ‘ humor’ took the lead, approved by 47% of the masses who found it fairly productive. This was followed by ‘real life situations’ which appeals to 46 % of the people, and then ‘family oriented’which persuaded 38% of the people.

However, ads that portrayed furry animals or creatures resonated more than those with celebrity appeal, the ratios being 12% and 8% respectively.

Nevertheless, this is definitely great news for digital marketers. This is because trust in online banners has shown a rise of 16 %, from 26 % to 42 % in the given time span. Thus, the market for digital advertising is getting bigger, now the key lies in meeting the customers’ expectations throughout!