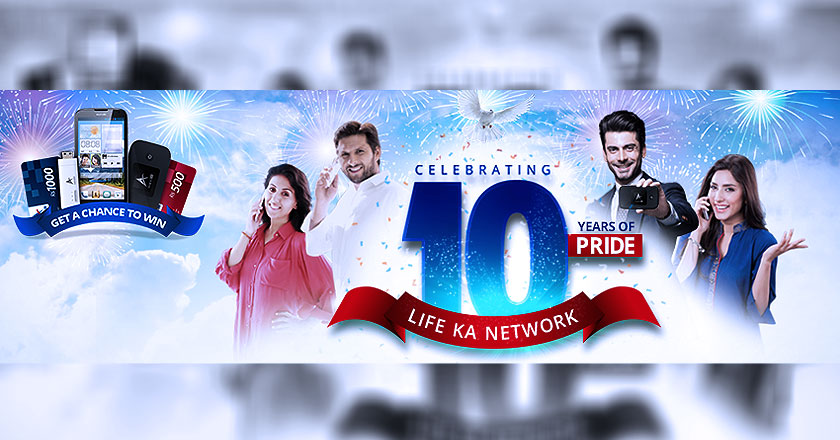 Warid Telecom celebrates its 10th year in Pakistan with its ’10 Years of Pride’ campaign.

On the event of its 10th Anniversary, CEO of Warid Telecom, Mr. Muneer Farooqui stated:

“Over the past decade, we at Warid Telecom have established ourselves as pioneers amongst innovative cellular service providers. Recently, we expanded into LTE services and became the largest and fastest growing LTE network in less than 6 months. The foundation of Warid’s success lies with our devoted employees and loyal customers. It is their support which has led Warid to become the most trusted brand of Pakistan.”

“I am also thankful to our stakeholders for their trust, to our honorable Chairman His Highness Sheikh Nahayan Mabarak Al Nahayan, Board of Directors and all our business associates involved in making Warid a success.”

Warid telecom is a trendsetter and a benchmark in Pakistan’s Cellular service industry. The company has a good reputation among its customer and to further improve it they have started several efforts.

To celebrate the pride in serving its customers, Warid have started an activity with the hash tag ‘#Warid10YearsofPride’. Customers have already started being a part of this activity.

My family needed money immediately in Lahore while I was in Karachi n it was a bank holiday #MobilePaisa helped me out! #Warid10YearsOfPride

Here are some details to participate in the activity and win prices which include Huawei G610, Warid Wingle, Warid Mifi and Warid PKR 1,000 & PKR 500 Scratch Cards.

Warid is an Abu Dhabi Group owned company providing state-of-art telecommunication services in Pakistan since 10 years. It is one of the fastest growing 3G and 4G network, namely, Warid LTE.