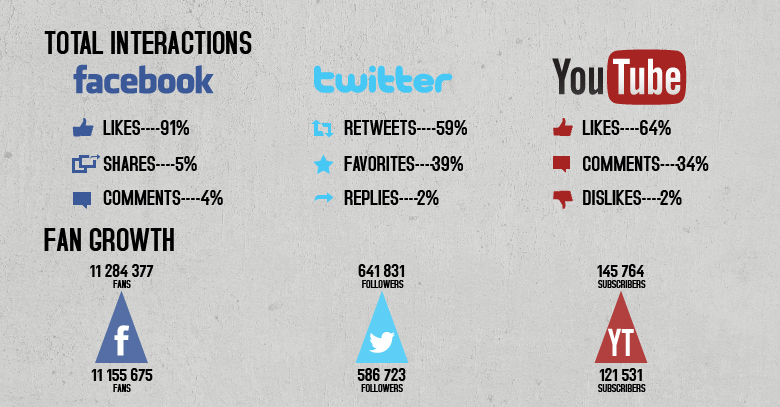 Not so very long ago television producers and film-makers were thrilled if their show, program or film ever became a topic of conversation among people in offices, restaurants or home.

Nowadays, with social websites like Facebook, Twitter and YouTube, promotion of events, publicizing celebrities and gaining immense fan following has become relatively easy. American Television drama series ‘True Blood’ went on to achieve the highest followings on all three of these social websites breaking all records.

Socialbaker.com recently reported that True Blood’s Twitter follower base by grew by 9%, as 55,108 new followers started following it.

In case of YouTube, the show recently gathered 24,233 new subscribers while Facebook added a whopping 125,403 to its already quite large fan base of over a million people, equaling a total of 11,284,377 fans.

During the current season, the total time dedicated, by fans, to view videos on True Blood’s official YouTube Channel equaled 13 years and 179 days. The channel also uploaded 59 videos to its repertoire.

A show that is popular on Twitter is increasingly a currency of success or failure. Do enough people “like” your show on Facebook? Well, if not, then why not? And will your program be recommended as a “must-watch” on the growing number of television guides available on social media.

The a recent study by Research TV genius shows that 90% of people on social networks make suggestions about what to watch, but if the series in discussion is a long-form TV program thenonly about 10% of people take up the suggestion.

This result shows that social media doesn’t have much impact on viewing patterns; it rather shows who is viewing what.

Nevertheless, one cannot underestimate the power of social media because it does help in generating ‘word of mouth’ and determines the popularity of the show. ‘Likes’ and ‘Tweets’ give a clear picture about the Television Rating Point’s (TRP’s) these show will generate and the revenue they will make.

The global reach of these websites also helps, the shows, to gain international popularity by providing them a stronger positioning for generating bigger revenue’s.

Where international TV Shows are making full use of these social websites it is sad to see that our local Pakistani channels are lagging behind. Granted that shows like ‘True blood’ caters to a larger audience but our shows, although for a limited audience, can expand their viewership by marketing themselves, via social media, in countries where the language is not a barrier.

As far as the Ratings for Pakistani shows are concerned, ‘Humsafar’ topped the list with 13.8 points while ‘Ishq-e-mamnu’ came in second with 11.6 points.

Turkish shows being dubbed in Urdu have gone on to become a success among the local audience so same can be done for the local shows. This will not only broaden the scale of the viewership but will also give the shows an edge to market themselves globally.

‘Humsafar’ went on to become a hit globally, statistics show the ‘Humsafar’ page on Facebook had thousands of European and North American fans, with many saying they’ve never watched a Pakistani drama but are completely hooked on to ‘Humsafar’.

Many have praised the acting and chemistry between the characters, particularly in the roles played by Fawad Afzal Khan and Mahira Khan. Naveen Waqar, who played Sara, gained instant success despite her negative character.

In addition to international popularity, Humsafar also became the most watched drama in Pakistani media history.

This drama serial is a proof of what our TV shows are capable of doing once given the right channel. They can certainly compete on the international forum.

These shows are not only a source of revenue but they act as windows for the Pakistani culture. Names like Fawad Khan and Mahira Khan now hold global recognition and many more can compete in the same league if given the proper exposure.

Pakistani television dramas and serials have become somewhat of a phenomenon, and not just in the homeland, but across the globe. Their storyline’s, characters and direction have all been applauded for their captivating the audience.

PTV classics such as ‘Tanhayyan’, ‘Dhoop Kinaray’ and so on still have Bollywood actors like Priety Zinta talking about them.

It is time we start acknowledging our talent and use the social media to our advantage. With the right amount of ambition Pakistan can come out on top as an emerging showbiz industry with global recognition.