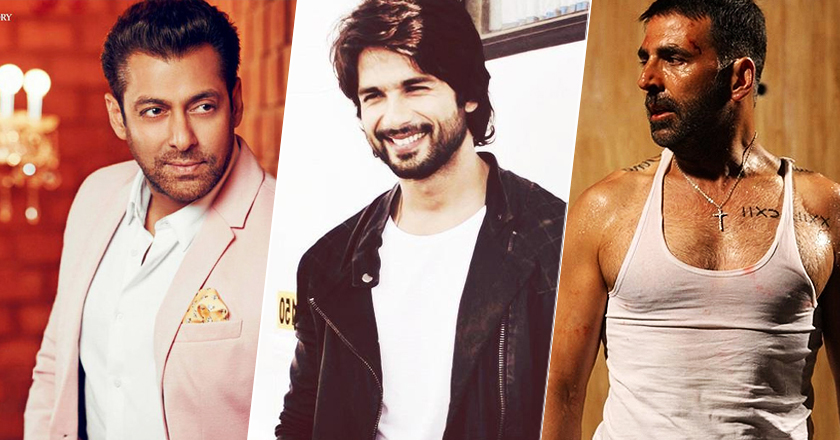 Back-to-back blockbusters, bold socio-political statements and a gazillion brand endorsements – the year 2015 was one lucky whirlwind ride for B-town’s men. Below is a rundown of the top 10 Bollywood gentlemen who ruled the 2015’s Google search trends. With Bajrangi Bhaijaan and Prem Ratan Dhan Payo, Salman Khan topped the list of the most searched male Bollywood actors in the year 2015. The actor not only gained popularity from the release of the two most successful Bollywood movies of the year but his long pending hit and run case result and celebrity reality show, Bigg Boss played a strong role in making him the most talked about actor this year. The King of Bollywood, Shah Rukh Khan is second on the list of the most searched male Bollywood actors in 2015, thanks to his hyped movie, Dilwale. Adding to his fame were the announcement of his two other movies, Raees and Fan. SRK’s statement on religious intolerance in India

SRK’s statement on religious intolerance in India also added a lot of rumors to his position as a Muslim actor in India. With back to back releases,  Gabbar is Back, Brothers, Baby, and Singh is Bling, Akshay Kumar has managed to score the third position among the most searched Bollywood male actors revealed by Google trends. His quirky sense of comic timings along with some jaw-dropping action sequence have established him as one of the most sought after actor of Bollywood. Although his much-hyped release of the year, Shandaar fell flat on the box office but his marriage with Mira Rajput kept him in the news throughout this year. The year 2015 has been quite eventful for Hrithik Roshan, both personally and professionally. His tremulous divorce with his wife Susanne Khan and the custody case of his children made headlines around the world. Professionally, the year didn’t bring any big releases for one of the most sexiest men in Asia but his immense popularity helped in making him viral on the internet. Although his three releases this year, Roy, Bombay Velvet and Tamasha failed to bring him any commercial success but his acting was appreciated in all three. Besides his movies, numerous well-timed brand endorsements and his relationship with Katrina Kaif added to his popularity throughout the year. Aamir Khan’s beefy look for his upcoming film Dangal and his controversial statement on religious intolerance in India were the only two happenings for the perfectionist in the year 2015.

According to the Google trends, Aamir Khan stood on the 7th place among the most talked about Bollywood personalities. The seemingly new entrant to B Land, Dhawan proved his mettle with a stellar performance in Badlapur and ABCD. His stunning dancing skills and candid attitude landed him the eighth spot in the most searched Bollywood male actors of 2015. The veteran actor once again proved why he rules millions of hearts with his stellar performance in Shamitabh and Piku this year. Some well-timed brand endorsements and social events added to his talk- ability and landed him the second last spot in the top 10 most Bollywood actor 0f 2015. His role in Drishyam and his promotion of tourism in Bulgaria helped him to secure the 10th position in the top 10 Google search of male Bollywood actors.