Home Pakistan Terrorist Attack in Karachi: Where Did the Media Go Wrong?
Advertisement 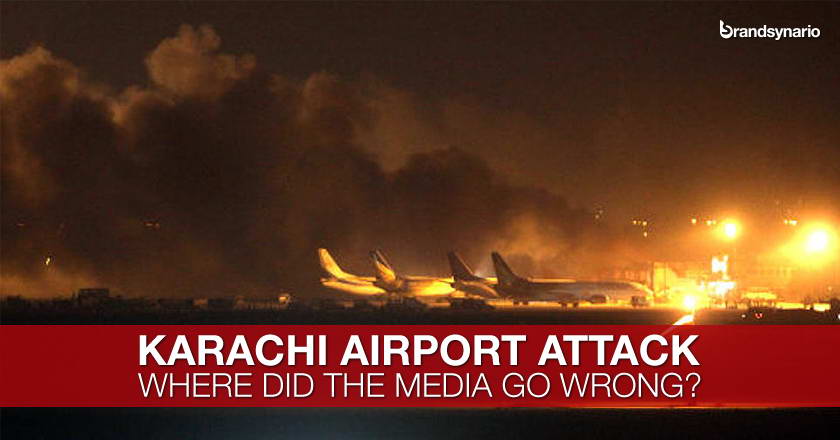 While all our defense authorities were busy fighting the terrorists at Karachi airport, there was another war going – a war that hasn‘t stopped yet – a war that won’t stop till you switch off the TV.

In these days of turmoil, the news channel stooped to the lowest possible ebb of insensitivity, in its quest for the best coverage and higher ratings. There were numerous newscasters and many channels all busy in a “Who spreads the most terror” contest.

The dread caused by the two consecutive attacks on Karachi airport was already cutting people like knives and our news channels sadly, left no stone unturned to multiply the horror by manifolds.

With the whole nation criticizing the media for their lack of maturity and responsibility, it’s high time our reporters and journalist learn from their errors.

Below are some tips for the media on what they should have actually instead of what they really did.

1. Remember its News, Not some Drama

Lesson number one – Please note that you are a news channel, your job is to inform not create. Be it ARY, Samaa or Dunya, our news channels definitely did a better job of manipulating information, exaggerating problems and adding an overall melodramatic aura to what should have been unbiased reporting.

People, in general, consider news channels as a vital source of information, so please spare all over-the-top drama, keep it simple and do your real job.

It would have been a million times better if, instead of triggering more dread, frustration and conflict; our news reporters had minimized the impact of tragedy lurking over the nation.

Their over the call shouting, abrupt not-so-breaking news alerts and repeated telecast of firing only added to the chaos and confusion. The morale of the victims, their families and viewers were shaken to the core, they could have sent out messages of peace and crisis management instead of igniting panic.

2. Work for Humanity, Not for the TRPs

It was sickening to see our news channels shoving mikes in front of crying victims’ families, all for the love of their television ratings.

The people at the scene were in dire need of compassion and empathy, instead they got to know cock-and -bull stories that didn’t even exist, and they got to see blown up bodies, bloodied airport staff and hospital vans that only spiced up the situation at the cost of paralyzing the minds.

Even a common man sitting at home is sensible enough to realize that you do not go and shove a microphone in the faces of those who are busy risking their lives in the battlefield.

Also, commercializing valuable and sensitive pieces of information will do nothing but assist our foes regarding every move of our heroes who are trying hard to defeat them. So don’t go overboard and be a total game spoiler for the law enforcing agencies.

Rather than promoting the blame-game between the government and political parties, appeal for first aid, food, water, blood donations and rescue teams is what should be have been done by the news channels in such a mayhem.

Instead of turning backs and pointing fingers over each other, the nation needs to unite, to stand all and appear strong against those who aim to tear us apart.

Let’s not forget that terrorism is just one side of Pakistan, the other sides of our country are equally beautiful. So better come together to spread the optimism and love that flows in this land rather than gloom and uncertainty.