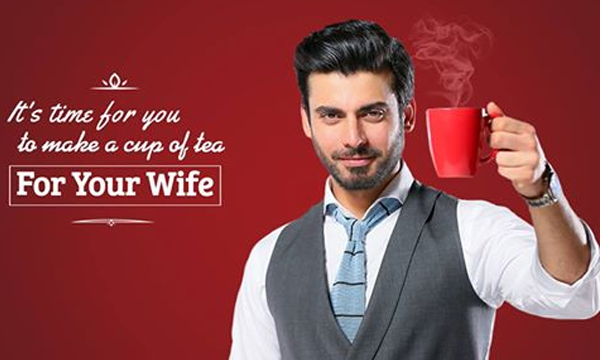 We all witnessed the ultimate heartthrob, Fawad Khan as an ideal “Humsafar” yet again, this time to Momal Sheikh in Tapal’s latest heartwarming TVC “Tum Mein Aur Aik Cup Chai”. Raising the bar for all husbands in the nation, Khan has truly made all wives envious for an endearing cup of chai, made to perfection by their better halves.

Fortunately, Tapal is giving Pakistani wives the golden opportunity to make their wish come true! All those ladies who want their hubbies to make them a steaming mug of tea, just tag them with #‎TumMeinAurAikCupChai on Facebook and encourage them to pamper you with a cup full of love. Who knows, your husband might take a leaf out of Khan’s book and surprise you this New Year by making tea!

Tapal is also giving out exciting gifts to lucky winners who become a part of this social media activity!

Watch this video rolled out by Tapal on its Facebook page, including shocking confessions by celebrity husbands on their chai-making habits. You will be happy to know Fawad makes tea for Sadaf in real life too!

Via the campaign, Tapal is surely promoting the greater role of gender role-reversal in Pakistani society. While the simple chore of making tea is mostly done by the ladies of the house, the advert makes men realize that doing such little acts of love will only bring them both closer together.

So all you married ladies, hit to Tapal’s Facebook Page, tag your partners with #‎TumMeinAurAikCupChai and tell them to treat you today with tea!