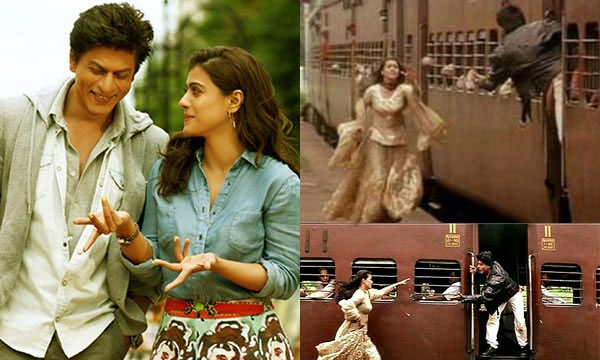 Shahrukh Khan and Kajol are all set to recreate the iconic train scene from Dilwale Dulhaniya Le Jayenge. The scene is being shot in Sofia, Bulgaria for the movie Dilwale.

If you are unaware of the connection between Bollywood and trains, then clearly you are not as huge a fan of Bollywood as you claim to be.

Under production and direction by Rohit Shetty, the movie is an action rom-com and apart from the much-loved SRK-Kajol couple, it additionally stars the newbie-charmer Varun Dhawan and the ravishing Kriti Sanon.

At the moment, the scene is being shot with a tram sequence, unlike the original movie scene which was shot at Lion’s Bridge Area with a train. Across various places in Sofia, Bulgaria, the Raj and Simran duo are already going viral with their pictures splattered all across the Internet. Released back in 1995, the Bollywood movie, DDLJ was a blockbuster hit amongst Indian as well as International audiences. Some of the trademark dialogues and scenes of the movie have time, time and time again been replicated in films that followed. Such as the hilarious rendition of a similar scene in Rohit Shetty’s recent venture, Chennai Express. The Raj and Simran duo was also relaunched in the guise of Sonam Kapoor and Imran Khan in movie ‘I Hate Luv Stories’

Co-produced by Gauri Khan, Shahrukh’s wife, it has been reported that despite his knee injury, the Romance King of Bollywood refused to let a body double shoot the aforementioned scene.

The movie Dilwale is slated to be released on 18th December 2015.