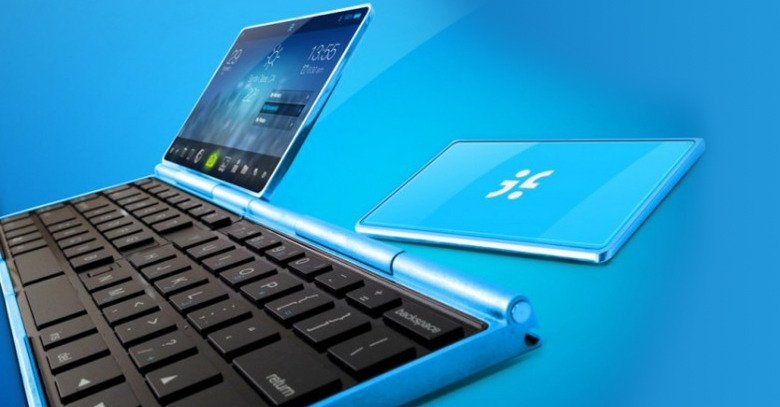 Imagine a dual screen ultrabook (laptop) that can flip and fold to be transformed into a tablet, with one screen capable of being detached to be used as a Smartphone. Seems unbelievable, doesn’t it?

The If Convertible seeks to bring this seemingly Hollywood’s version of futuristic invention into the hands of everyday man by the end of this year, with Xentex – an ‘all in one’ dual screen ultrabook, tablet and Smartphone.

A series of legal issues have been delaying the release of the Xentex Flip-Pad, for almost a decade now. However, the CEO of the company Jeff Batio seems to be back on track with the updated version of the flip-pad.

Batio, in the last decade, shrank the size of his concept ultrabook from a bulky laptop with the 13.3 inch displays, to a much more compact device sporting two 7-inch displays.

The screen technology of device is yet to be finalized; however Batio claims that each display of the new Xentex will pack a full HD 1920 x 1080p resolution. Also, the two displays would provide a total of over 12-inches of combined screen real estate.

In ultrabook mode, Xentex would seem like a couple of undersized laptops placed side by side that share a common, full-sized keyboard. In addition the ultrabook mode, allows the user to toggle the screens to be used as one display and two independent displays.

Even in addition to this the display screens can also be flipped around facing the opposite directions, implications of this are limitless, like the use of Xentex in presentations or two-player games and many more.

Upon rotating Xentex’s screens and folding the split keyboard, makes the ‘If Convertible’ to transform into a high functioning tablet, allowing the right screen – or (the official name)”Slingshot” – to become a smartphone when detached from the base.

The left screen is fixed attached to the keyboard base at all times.

There are many uncertainties that circulate the brand so far, like the choice of CPU or GPU, final launch date and even the price.

However Batio claims that Xentex will be powered by a multicore x86 processor, while the detachable Slingshot will pack unparalleled heat which Batio calls ‘the fastest multi-core processor in a mobile device.’

Along with supporting Windows 8 while the Slingshot would run on a latest Android version.

As for other specifications of the base and the SlingShot

Batia claims that the base and the Slingshot will both contain their own battery, while the Slingshot is seeked to be powered by a powerhouse 3,000 mA battery. Xentex base is supposed to have a life of 18 hours that would make it a ‘large capacity system battery’

With 4 GB of RAM and 128 GB of storage each, Xentex base will include a SD card slots supporting cards of up to 128 GB capacity, for a potential total of 512 GB.

Xentex has a total weight of around 1 lb and measurement of 6.1 inches in width and 4.3 inches in length the slingshot has a front facing camera. While in the ultrabook mode (the screens folded down) the device stands at 0.5 inches in height from the rear, tapering down to a 0.3 inches from the front.

Whether the Xentex Flip-Pad would have been a success if it had been released in 2003 is something we’ll never know, howeer the device is ready to be released in July 2014, thus entering the history’s most competitive mobile market with an expected Price starting from USD 649.