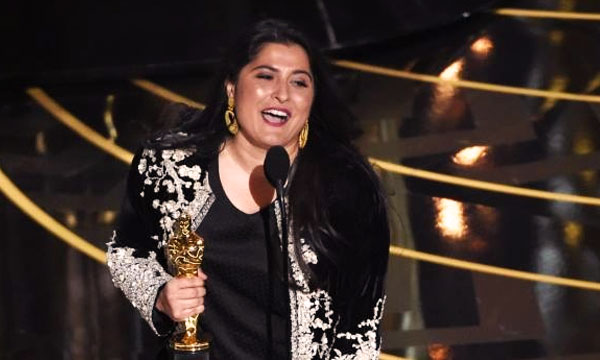 Pakistan’s only Oscar winner Sharmeen Obaid Chinoy has won another Academy Award for her documentary A Girl in the River, in the category Best Documentary – Short Subject.

Obaid-Chinoy previously won Pakistan’s first Academy Award for her documentary Saving Face at the 84th Annual Academy Awards in 2012. She is one of only 11 female directors who have ever won an Oscar for a non-fiction film and the only Pakistani to win two Academy Awards.

The category of Best Documentary (Short) was presented by Louis C.K to Sharmeen Obaid Chinoy.

Upon receiving the award, Sharmeen Obaid Chinoy said: “This is what happens when determined women get together. From Saba, the girl in my film who remarkably survived honor killing and shared her story, to Sheila Nevins, Lisa Heller from HBO and Tina Brown who supported me from day one.”

“To the men who champion women, like Geof Bartz who has edited the film to Asad Faruqi, to my friend Ziad who brought this film to the government, to all the brave men out there like my father and husband who push women to go to school and work and who want a more just society for women!”

“Last week, our Pakistani Prime Minister has said that he will change the law of honor killing after watching this film. That is the power of film!”

Wearing a floor-length black Sana Safinaz coat over a matching dress, Sharmeen had earlier walked the red carpet with her mother and the SOC Films team.

“I have another one!” said Sharmeen as she took the stage to accept the award, her second after she won an Academy Award for Saving Face in 2012.

“This week the Pakistani PM said he would change the law on honor killing after watching this film — that is the power of film!” said Sharmeen on the stage.

Sharmeen has been in Los Angeles for the past week in preparation for the Academy Awards, arguably Hollywood’s biggest night of the year.

Sharmeen definitely caught the government’s attention with A Girl in the River — the film was screened at the PM House in Islamabad just last week. Following that, Prime Minister Nawaz Sharif said that honor killing was a critical issue and voiced his government’s determination to eradicate this practice from society.

Sharmeen has gone a long way to make Pakistan proud. We wish her all the best in all her future endeavors.

Stay tuned to Brandsynario for more on Oscars 2016!