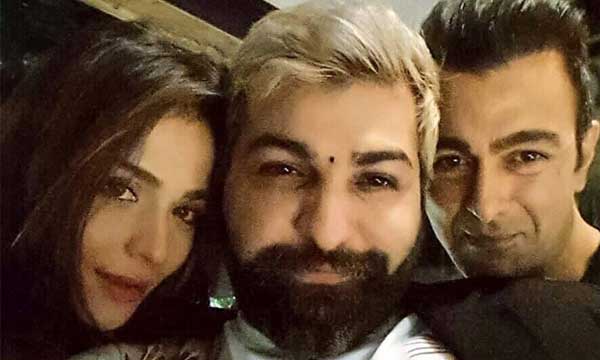 Two of Pakistan’s hottest superstar, Shaan Shahid and Humaima Malick recently clicked a seflie together with ace Pakistani designer, Ali Zeeshan. The candid picture has left us curious about the reason behind their meet-up.

Although there is no official news, but according to our inside sources, Shaan and Humaima met up to revive the discussions for their mutual project, Arth 2.  Judging from the picture, Ali Zeeshan might be Humaima’s designer for the upcoming movie. Arth 2 is a remake of popular Bollywood movie, Arth and for the first time ever, Shaan Shahid and Humayun Saeed will be seen in a director-actor relationship in the remake of Arth 2. Shaan will direct the movie while Humayun Saeed will play the role of the lead protagonist.

Director Shaan Shahid has left no stone unturned in ensuring that the storyline is dealt with utmost sensitivity. He contacted Bhatt for the writing of the remake, for which he received a positive response.

The original version of the film had legendary actors like Shabana Azmi, Samita Patil and Kulbhushan Kharbanda in the lead roles and apart from the performances, the music by Jagjit and Chitra Singh also made the film a Bollywood classic.