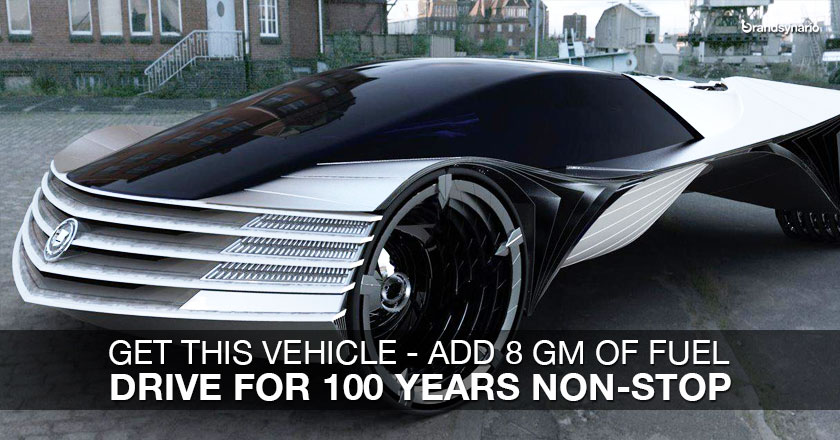 Imagine a vehicle that requires no fuel for year!

We are not talking about water powered vehicles, neither are we talking of the solar powered ones. What we actually mean is athorium powered car that can go up to 100 years without any fuel requirement

A company by the name of Laser Power Systems came up with a concept of thorium powered cars; these cars even exterminate the need for fuel stations.

Thorium is one of the densest materials found on our planet. A small sample of Thorium compared to the same amount of coal has 20 million times more energy conserved; this explains why 8 gm of Thorium can power a heavy four wheel drive for up to 100 years non-stop.

However, CEO Dr. Charles Stevens of Laser Power Systems negatively responded to the installation of Thorium in cars anytime soon. He commented,

“Cars are not our primary interest. The automakers don’t want to buy them.”

Thorium is a radioactive material and thus Laser Power Systems is using it to power turbines for energy production purposes.

If implemented on larger scale,  Steven claims that this discovery can also power the remotest areas of the world where electricity is still an issue including the large metropolitan cities.

As Steven describes it,

“We’re building this to power the rest of the world,”

Though the discovery in itself is quite a powerful one but then again it’s a radioactive element and who would want to take such a risk? But Steven even counter explains this point, saying,

“The radiation that we develop off of one of these things can be shielded by a single sheet of aluminum foil; you will get more radiation from one of those dental X-rays than this.”

horium cars, if manufactured in near future are surely to get sold like anything. After all,  who wouldn’t wish for a car with only once in a life time fuel requirement.