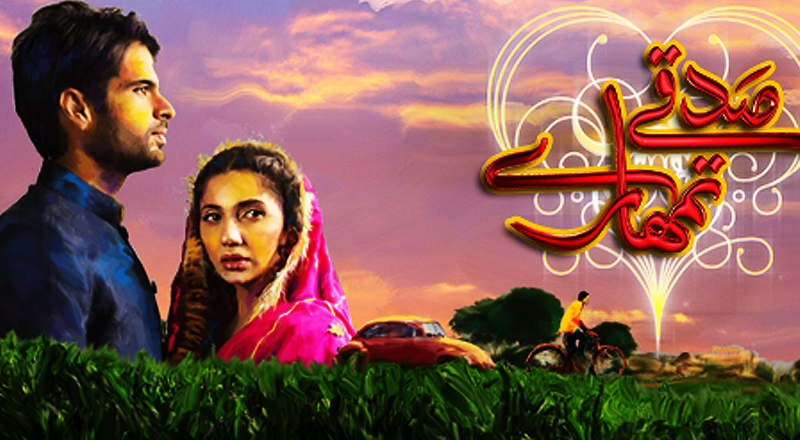 A delightful ode to the golden old decade of the 1970’s when life was sweet, simple and soulful:the drama serial titled Sadkey Tumharey is only on its second episode and has the audience already hooked to the dreamy-like rural life.

Set in the spell-bounding, serene scenes of the sandy Punjabi village “Bhopalwala”, HUM TV’s new tale is slowly unfolding as a timeless love legend, penned down by Pyaray Afzal’s mastermind “Khalil-Ur- Rehman” and directed by Ehteshamuddin.

The plot weaves around Mahira Khan as Shano and her cousin Adnan Malik as Khalil, both engaged to each other around the time they were kids and have not met in a decade. While Shano daydreams about her fiancé and longs to meet him, Khalil is unconcerned and indifferent with the whole idea of being committed to his cousin.

Both have completely opposite personalities; Shano is warm-hearted, soft and selfless, shy and loving while Khalil has tons of “nakhras”, wants to be pampered and treated like the Prince of Punjab.

While Shano’s parents too have given up on the engagement, she is determined to meet her prince charming; positive that he will fall head over heels in love with her once he set his eyes on her. Apparently, luck is on Shano’s side. Her prayers get answered and Khalil envisions her in a dream.

An upcoming family wedding marked the reunion of the two soon-to-be-lovers, where Shano is excited to the core to meet her man while Khalil is just too arrogant to admit the fact that he has come to the occasion only to met his fiancée. Even while everyone is busy singing wedding songs at the “Dholki”, he is adamant on eating “Sarsun da Saag and Makkai Di Roti” with the condition that it should be cooked only by Shano.

Till now, the story has maintained a measured pace, making the already anticipated audience curious with the drama’s upcoming installments. It’s obvious that there soon will be the rise of a villain between the love story of Shano and Khalil, making things more intense and increasing the climax a notch further.

Mahira Khan has made a successful comeback, looking even more natural, gorgeous and young in the drama. Her acting skills are doing her  justice in the role of the innocent and lovable Shano.

But what is more worthy of appreciation is the fact that every tiny detail has been so smartly and keenly carved in the drama. From the mesmerizing Dharga scene to the  start of Shano’s father busted Volkswagen, the taanga (horse-ride) of Khalil and his mother to the warm welcome at the village of Tooti Chak, all the scenes  speak volumes of the kindness and genuineness that thrived amongst the people of the those times.

It’s even pleasurable to watch the customary colorful clothes and the greenery of the fields (khaits) all adding to make “Sadkey Tumharey” worth watching.

You can tune in to Sadkey Tumharey every Friday on HUM TV at 8 PM.