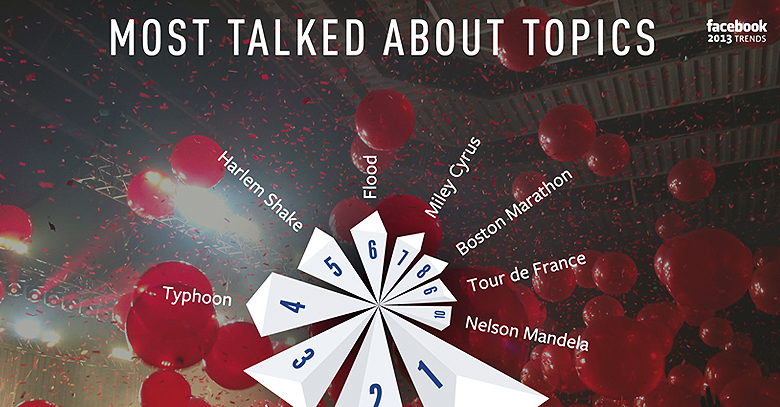 What does Neslson Mandela, the Royal baby and Pope Francis have in common? Well all three, according to Facebook, are amongst the most discussed topics of 2013,

As the year is about to close, Facebook’s data masterminds have raked through the websites enormous pile of data and unveiled a variety of end-of-the year lists to recall the events, people and places that mattered most to the FB-holics.

Accompanying the lists, the complementary website “Facebook stories” also rolled a cool year- in-review video that takes the viewers down the memory lane with glimpses of the grumpy cat, cute smiling kids, the viral sensation Harlem Shake and the poignant Boston Bombings.

Apparently, Love was in the air in 2013 as people’s most celebrated event on Facebook was “added a relationship, got engaged or got married”. “Traveled” and “Moved” were rated at 2nd and 3rd respectively. Quite oddly; “got a piercing” also made it to the list at number 9.

The most buzzed check-in places were immensely diverse and their list is never ending. However a look on it tell us that Disneyland wins, as it becomes people’s most favorite spot in Hong Kong, Tokyo, Anaheim and California.

Most Talked About Topics

If you thought that 2013 was the year of Miley, then you are wrong as Pope Francis topped the “Most talk about topics worldwide” list, while the biggest happening of last week “the death of Nelson Mandela” got the tenth spot.Surprising enough, Cyrus got badly beaten by the Royal Baby and Harlem Shake and landed on the 7th spot on the list.

Typhoon Haiyan, death of Margret Thatcher and Boston Bombings were also the top members of the list

In addition to this, Facebook has also enabled a tool for its fans to rewind their happenings and events of 2013 as well as of their loved ones. This way, FB junkies can have fun by reminiscing the memories of their own year.