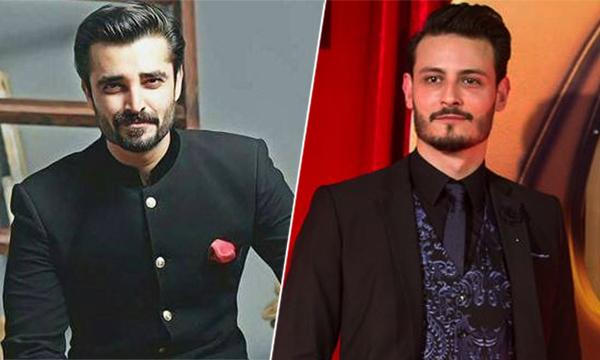 The nation’s entertainment industry is all set to witness the casting coup of the century. Our most favorite superstars; the heartthrob Hamza Ali Abbasi and the hunky-dory Osman Khalid Butt will be seen in Hum TV’s upcoming movie “Parwaaz Hay Junoon”.

The happening news was revealed in HUM’s exclusive launch event of the film. The one-of-its-kind Pakistani film will be the very first cinematic venture to honor the gallant soldiers of Pakistan’s Air Force, in the last 50 years. A Momina Duraid production, the film is written by Haseeb Hasan and is penned by Farhat Ishtiaq. Parwaaz Hay Junoon is slated for Eid-ul-Azha 2017 release. The plot has been inspired by real P.A.F success stories.

Both the male leads appeared pretty thrilled to be a part of Hum Films groundbreaking project. An excited Hamza Ali Abbasi even revealed to the media that his scenes will be shot in CASA Aircraft. Meanwhile, Osman Khalid Butt seemed perfect to play the character of an air force pilot. Talking to the press, the star divulged that he always aspired to ride the skies and will be getting a chance to play the versatile role of a pilot on the silver screen! What is more, Momina Duraid declared that Parwaaz Hay Junoon’s major portion of earnings will be denoted to P.A.F funds.

However, the movie’s leading lady is still a secret! Now a huge wave of curiosity is in the air regarding who will be the stunning starlet in the project. We really hope its Mahira Khan! She will make an amazing lead with Hamza Ali Abbasi and Osman Khalid Butt. Another great choice will be the rising diva, Maya Ali. We have seen her work wonders, sharing screen space with both Abbasi and Butt! Abbasi had us hooked with his character as Salahuddin in Mann Mayal. Similarly, Osman Khalid Butt won us over with his moving performance in Diyar-e-Dil.

Together, these supermen are bound to create a spark on the silver screen! Can’t wait to see them rock  in the honorable green uniform!