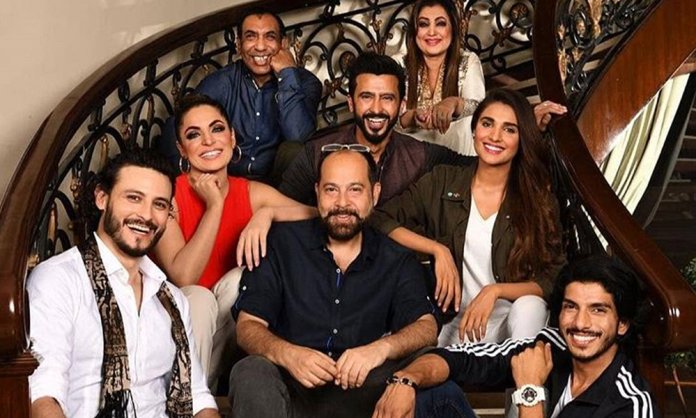 Saqib Malik’s upcoming project, Baaji – The Film, has been in the news for quite some time but with its principal cast now revealed, it looks like something special is soon going to hit the big screen!

Starring some of the most trending names of our entertainment industry including Osman Khalid Butt, Mohsin Abbas Haider, Ali Kazmi and Amna Ilyas, Baaji – The Film will also feature the evergreen actress of Pakistan, Meera Jee.

Can we please talk about how underrated @meerajeeofficial is? 🌟 Visit our website for the full story, link in bio. #meerajee #pakistanicelebrities #pakistan #instapic #jj 💛

Osman Khalid Butt took to Instagram to announce this big news and posted this picture along with other cast members of the film.

I've waited the better part of a year to announce this news: I'm starring in Saqib Malik's debut film with this kick-ass cast! People who've followed me since way back know what an absolute fan of Meera's I am – it's been (and remains) a fantastic journey, and I cannot WAIT to share more news with you guys. @Regran_ed from @baajithefilm – Proudly announcing the principal cast of Saqib Malik's magnum opus #Baaji. More details soon! #bajithefilm #page33films #saqibmalikfilms

This will be Osman Khalid Butt’s second movie and the Balu Mahi actor seems really excited to work alongside his ever favorite actress, Meera.

From YouTube sensation, then TV and now on the big screen, Osman Khalid Butt is on his way to become a superstar in no time. He also recalled being a huge fan of Meera Jee which only his old followers would know about. (Yes, we do!)

Osman also shared how he’s having a fantastic time working on this project and can’t wait to reveal more details about it.

With thighs wide open – not a Creed song. Photography: Faraz (Citrus Talent) On location at the 7Up shoot.

The NMA-2 actor, Mohsin Abbas Haider also shared the news with his followers on Instagram.

When the news of this upcoming project came up back in May, rumors had it that Saqib Malik is going to make Meera Jee’s biopic, but the filmmaker had to come forward and clear the air.

Saqib Malik said in an interview,

“The news is incorrect. My film is categorically not based on Meera, but a character drama based on a variety of social themes. And the script is still in the works.”

He further added that more details will be revealed soon once the script and cast get finalized.

Now that its cast has been revealed, Baaji – The Film looks promising enough to be looked forward to and we can’t wait to get our hands on more details about this upcoming movie.

The release date has not been announced yet

Yet to be released