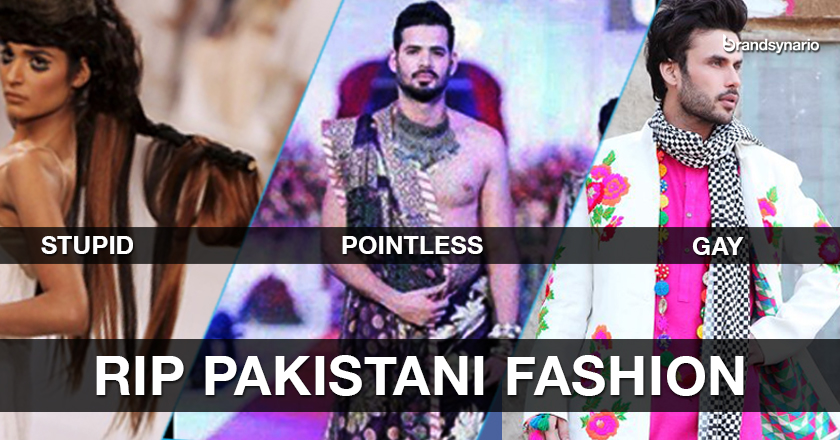 There is a fine line between bravery and stupidity – a line that, unfortunately, we can no longer see in our fashion industry – along with other important things like; Clothes.

There is a wise saying that,

“ONLY OPT FOR A FASHION THAT SUITS YOU.”

The Fashion industry of Pakistan has seemingly forgotten this basic rule; oh no wait!  It’s actually the west-inspired designers who, in their pursuit to copy western artists, have ruined the true essence and purpose of fashion in Pakistan.

Few months back, the social media went abuzz with image shots of this male model wearing a SAREE, yes you read that right a SAREE! This time around some unknown designers has managed to go viral for all the wrong reasons. Clad in what can only be called a sheer disaster, this man is making rounds on social media with his ‘East meet West and Results in a Disaster Look’. As a viral social media page so aptly put it, the dress only says one thing:

“When you have jumma, nikkah and job interview on the same day.” Trust me; the feelings were mutually hurt and comments were equally abusive as thousands of Pakistanis pondered over the shocking portrayal of something that remotely resembled a roman priest, a hindu pundit or worst, the famous ‘Indian Bahu’s Saree’.

Designing a SAREE for men seems more like an absurd approach to represent a local gay style (assuming that there is one). There’s no point in promoting western culture as your own, if our designers are so west-inspired then they should think of settling abroad in a more competitive environment.

There is no harm in being bold and our agenda here is certainly not against skin exposure, the point of this argument is the relevancy with one’s target market. Our fashion industry is touching zenith when it comes to being bold, blatant and creative to the point of being called stupid. Can we say describe Pakistani masses as bold and blatant? Sadly not!

The audacity is not just limited to westernization; it has even ruined our country’s most honored heritage including Sindhi Ajrak, a well-known symbol of pride and honor; the honor was shredded into pieces when models walked out on the ramp of Sindh Fashion Show 2014 wearing the same Ajrak designed as skirts, hats and blazers and shorts.

Talking about bashing, Stoneage and Chinyere’s latest collections have by far beaten every other fashion house when it comes to bizarre designs and irrelevant fashion. All you need is a bit of common sense to make a dress worth-wearing; maybe there’s one simple thing that our designers keep forgetting, i.e. the requirement and lifestyle of their target market.

A few months back, we did warn Stoneage of the impending disaster but it seems our warnings went unheard. The brand, which used to represent the genuine urban talent of Pakistan doesn’t even remember that it’s actually clothes that are up for showcase and not the skimpily covered bodies of half-clothed people lying over each other.

A relatively new name in the industry, Chinyere too, is trying hard to cope up with the competition and weirdness of the fashion industry in Pakistan. In an attempt to gain attention and do something out of the box, the brand played a bad move in the form of their latest Gulab Khan collection 2014.

Yes, we know our pathan brothers love to wear vibrant colours but you didn’t have to make it obvious with a bubble-pink kurta and multi-colored embroidered jacket. To top it all, you named the collection ‘Gulaab Khan’.  You think it’s creative? Let me tell you, its plain derogative to turn a Gulab Khan into a Gulabo! When it comes to fashion, the designs, the creativity and the concept of a fashion designer are to be exposed and highlighted; exposing models and their barely covered bodies, weird hairdos and garish makeup just take the limelight away from the actual product.

A sincere advice to all unfortunate designers who sadly lacks common sense:

‘if your work is not good enough to be on the ramp then please try harder, instead of using some patches of clothes to define fashion.  You’re only adding visual pollution to an already polluted industry society.’