Home Entertainment Celebrities Pakistani Celebs are Having a Ball in Norway and We’re a Little...
Advertisement 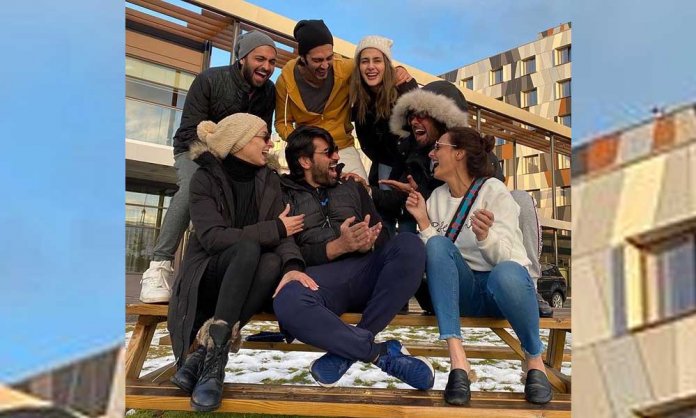 One of the biggest star-studded Pakistani events ‘The International Pakistan Prestige Awards 2019’ is all set to take place in Oslo, Norway on December 7.

Pakistani celebrities shared some amazing pictures of themselves having a blast in Norway as they refused to let the cold bother them (you know like Elsa? The cold never bothered her anyway?)

Moving on, the entire city is covered with snow, but our celebrities are having a ball there. Renowned names like Asad Siddiqui, Zara Noor Abbas, Neelum Muneer, Maya Ali, Kubra Khan, Shehzad Sheikh, Ahmed Ali, Hira Mani, Yasir Hussain, Ayesha Omer, and several others have been spotted literally on the streets of Norway.

Have a look at how much our Pakistani starlets and handsome hunks are enjoying in Norway.

How cute is this?

Maya Ali is channeling her inner snow queen in this picture and its totally cute!

Look at that stylish gang!

Momal Sheikh also shared an adorable shot on her Instagram

Friends are the family we choose ~ love you all ❤️❤️

On a scale of 1-10, how much do you love Sarwat Gillani and Ayesha Omer? It’s just too much perfection in one frame.

Is Hira willing to give lessons on ‘dress up chic and stylish 101?’ Because we’re taking that class!

So pretty! Neelam looks like a barbie doll in this shot

Totally loving this amazing group of divas and dappers!

Snow is our natural Polly.

The IPPA is considered as one of the country’s biggest showbiz awards, attracting nominations from entertainment TV channels and the film industry. The celebrities will be awarded in 30 different categories ranging from fashion, film, TV, dance, and music.