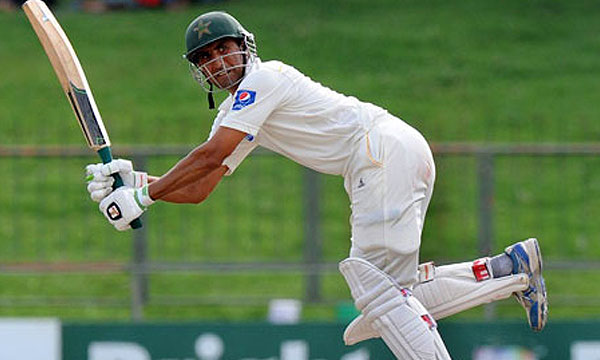 A match-winning knock from Younus Khan ensured Pakistan cruised to a comfortable victory against the Mighty Lankans on their home turf, winning by 7 wickets in the third test at Pallekele, and wrapping up  the three-match Test series 2-1. Younus Khan was well supported by the young Shan Masood, whose mature innings set up the victory, after Pakistan lost two quick wickets in the final innings on Day 4.

After winning the toss, Misbah ul Haq decided to put Sri Lanka into bat. Sri Lanka answered well to the challenge and made 278 runs, with Karunaratne excelling with a score 130 runs. Yasir Shah was the pick of the Pakistani bolwers with 5 wickets. Rahat Ali and Azhar Ali took 3 and 2 scalps respectively.

In reply, the Pakistani batsmen seemingly buckled under pressure, losing wickets in quick succession before getting out on 215 runs. Prasad, Pradeep, and Kaushal took three wickets each.

With a lead of 63 runs, the Sri Lankan batting lineup looked shaky, and lost 4 wickets at 80 runs, before a partnership between Chandimal and captain, Angelo Matthews, took their score past the 275 mark, before the entire team got out on 313 runs, setting up a target of 370 runs, the second highest run chase in Asia, for the Pakistani batsmen to chase. Imran Khan took 5 wickets, while Yasir Shah and Rahat Ali took two each.

In response, Pakistan lost two quick wickets for 13 runs, and that is when the legendary Younus Khan came into bat. Assisted by the nervous youngster, Shan Masood, Younus Khan made some brilliant cricketing shots, which helped boost Masood’s confidence too. Soon the pair was driving, pulling, and making runs, and took the score to 230 for 2 at the end of Day Four of the test match, with both the players making centuries. This was Younus Khan’s fifth century in the fourth innings of a test match, the most by any batsmen in the history of the game. Shan Masood made a mature 125 runs before being stumped out on the last day. The pair put on a partnership of 242 runs. Younus Khan made 101 runs. The formalities were soon over, as Pakistan wrapped up the match, winning by 7 wickets, and winning the series 2-1. Pakistan had earlier recorded their first Test win on Sri Lankan soil in 10 years when they won the first test of the series.