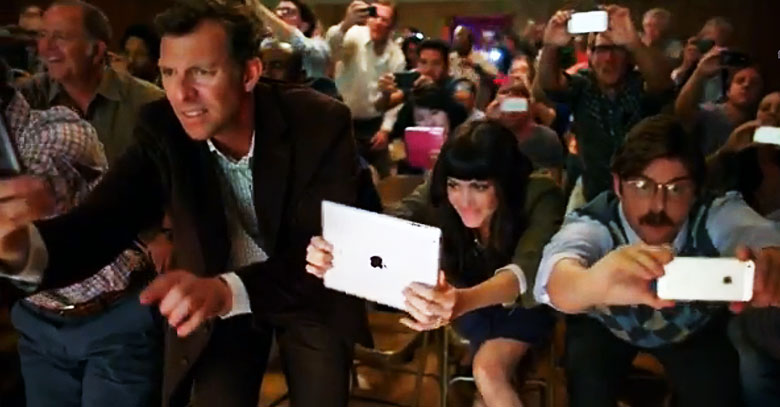 Nokia seems to be on the height of extroversion these days. They are saying everything, implicit and explicit, openly taking names, using sarcasm and irony as their new tool of revelation.

Remaining steadfast to set this new convention, they are coming up with advertisements, one after another, and their latest Nokia Lumia 1020 advertisement surely promises to amaze you with its impeccable articulation.

The ad features a school talent festival, where children are dressed as cute fruits and vegetables. All the parents, as expected, have their gadgets gripped, to get one perfect shot of the ‘apple of their eye’. However, things do not get as smooth as you think they would.

You see wives pushing their husbands to front, neighbors smacking each other and even people dropping from the terrace, all in the pursuit of taking the closest picture to the stage.

From climbing their neighbor’s shoulders to knocking them off using their heads, they do everything and clearly not leaving anything to imagination.

The ad shows a wide range of gadgets, from tablets to smart phones, branded with pioneer brands like ‘Apple’.

If you think the drama ends here then you are wrong; Nokia goes full throttle at the closure as we see a woman being banged off before she can completes saying Apple’s tagline “you know every day more photos are taken from an ipho…”

This is not the first time that Nokia has been so ‘competitive’ with its advertising. Nokia Lumia 920’s commercial broke the ice long time ago. Set in the ambience of a wedding, the advertisement showed a peaceful ceremony turning into mayhem, when the ‘technology’ battle breaks in.

There are a series of events, from flying objects to tearing shirts, to portray people’s frenzy to take the perfect click. You hear names of the famous competitors of the brand with clarity, along with the message which the brand is trying to deliver to you.

The screenplay of the advertisement is quite similar to that of Nokia Lumia 1020’s ad, with two people at the end asking each other about the reason behind the chaos.

The current advertisement of Nokia Lumia 1020 aims to highlight the 41 megapixels and extended zoom features that the phone offers to the audiences. However, the way these features are represented does raise eyebrows.

On one hand, this advertisement immediately captures your attention, and ends up giving you a hearty laughter. On the other, at some point of time, you do say to yourself “Is this the right way of publicizing your brand’s features”.

It is still ambiguous as to what direction does Nokia wish to achieve through this ad. However, there is one thing that the company is yelling out loud through its advertising and that is ‘Bring it on!’