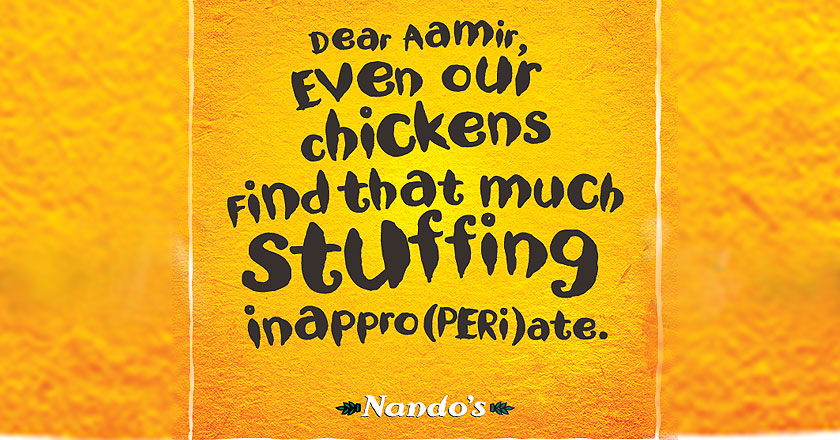 Nando’s Pakistan isn’t just famous for its delicious, mouth-watering and spicy Portuguese cuisine but also, for its clever and witty take on the hottest topics in town.

Never one to miss an opportunity, the brand just capitalized on the recent stunt of the much acclaimed and equally notorious Aamir Liaquat through the following visual posted on their social media pages.

The long-time king of Ramadan transmission, Aamir Liaquat recently became the target for social media trolling due to his ‘mango stuffing stunt’.

The much talked about host usually pulls all kinds of spectacles to get more attention and ratings on his show. While last Ramadan was about wrapping snakes around unassuming new singers and giving away babies, one of this Ramadan’s antics is stuffing guest’s faces with mangoes.

Nando’s commented on this awkward and inappropriate act, being widely criticized by taking  out their own spin on the situation.

Nando’s Pakistan is famous for its tongue in cheek quip here on a number of topics like the Lawn fever, cricketers’ faux pas and sometimes boldly enough even politics.

The topical nature of Nando’s adverts is their global strategy of breaking clutter and talking about local burning issues that are close to people’s hearts.